Reel Desire is not about the need to go fishing but rather brings the act of flirting onto the playing field of a slot. This Yggdrasil slot uses a clear ‘80s vibe with electric graphics, free spins and random wilds to bring this setting to life.

Released in 2021, this 5-reel, 4-row playing field slot is set to bring people back to a few decades ago as the game uses a lot of neon colours and a bunch of fitting symbols to get this effect. The slot is very colourful and most of the symbols are original. Even the low-paying card suits are edited to look like records in odd shapes, which I think was a clever idea to get them to fit the theme.

The background shows a disco, with sound boxes and harsh lights. Whenever the free spins mode is activated the player is moved to another part of the disco to keep it interesting. Getting a win on one of the 1,024 paylines will not really get an original animation.

When it comes to the soundtrack, the developers decided to create an original pop song that fits the setting perfectly. It’s rather toned down and relaxed during the base game, with a more intricate jingle when a win is triggered, but the game doesn’t hit a harder note until the free spins mode is activated.

As the game is set in the ‘80s it also makes extensive use of the visuals that were popular at that time. That means a lot of bright neon colours and very gaudy-looking clothing pieces. The high-paying symbols are mostly originals that represent the time period. The low-paying symbols are based on card suits but designed to fit the setting. Finally, there are two characters in the game that represent the romantic story, even though that doesn’t come through in the rest of the slot.

The payouts for a full payline is quite high but that’s because it’s not particularly easy to achieve this. Even in the free spins mode, it will only occur occasionally. Because of this, the game is listed as High Volatility, which players can mitigate by picking a bet between £0.25 and £75 per spin. This is all in service of the maximum win, which can be up to 20,480x your bet.

Reel Desire has a small number of different features, none of which are very original but they do work well together. The game has the following features:

The features in the slot appear frequently which is a good thing, but the game still doesn’t grant wins easily. The wilds are present during both the base game and the free spins mode, but making them sticky during the free spins does help in making them more useful.

All the wilds in the game have a 2x multiplier applied to them. During the free spins mode, players have the choice between two different extra features depending on the character they pick:

I found the Girl feature to be the most volatile since it requires Wilds to appear and hopefully on the right places in order to facilitate wins. When they do, however, they all become sticky and can really increase the total wins during the free spins.

On the other hand, the Boy feature is not as volatile since the game can be assumed to grant a series of wins during the free spins mode, which will increase the multiplier by 1 for every win you get. This can result in some big wins on the later spins. The downside is that the game doesn’t make it more likely to win compared to the base game.

I did like that players have a choice between the two features but I think that having both features active at the same time instead would not have decreased the volatility a lot while making it more interesting to play.

Reel Desire is a slot with a fun, original setting and a great looking appearance as a result of it. The downside is that the premise of boy meets girl is entirely underutilized and if not for the name and the intro screen I would not have guessed that’s what this slot is about.

The features aren’t very original and I think that there are plenty of games that already combine free spins, sticky wilds and multipliers. The ability to pick between the boy or the girl when the free spins mode is activated is a nice way to involve the player, but it still feels rather unnecessary.

If you are looking for a reason to play the game, either consider the appearance of the slot or the maximum win that is huge compared to most other slots. It’s not likely anyone will get it, but that’s the entire point of these slots.

Browse casinos with Reel Desire and other slots from Yggdrasil. Create an account and try the game for free before making a deposit.

You can play Reel Desire in English, Finnish, Swedish, German and 18 other languages. 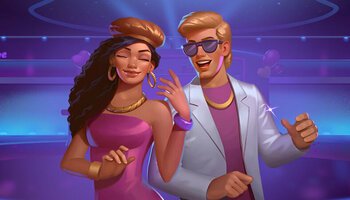