Online slots about cops and robbers remind me of black and white comedy movies involving clowns and random people taking a cake to their face. Lo and behold, Reel Heist by Red Tiger Gaming does have its funny moments and the graphics play to that tune with every spin. But there is nothing 'funny' about the maximum payout, which can get as high as 2,000x your bet.

Reel Heist nails on the head every stereotype about grinning robbers and panting coppers vying to dominate the reel set. While I don't find the graphics particularly engaging, the gameplay is quite entertaining because it provides you with a chance to slam a big payout. On the other hand, Red Tiger Gaming hasn't furnished the game with an extra feature so you can expect a pacier reel adventure and decent symbol payouts.

In terms of graphic design, Red Tiger Gaming has done a great job at animating the robbers' symbols. These and the wild are the highlights of Reel Heist because they light up the reel set and because they can interact with one another towards the potential big reward multiplier.

The reel set represents a posh street that attracts an assortment of characters who are looking for an easy, and highly risky, way to earn bigger cash. By day, the street seems more at peace but once the houses are steeped in nightly shadows, the robbers emerge to operate and the cop is ready to throw his trusty baton.

Now just what in the world does all this mean? The lively characters and their antics on the reel set are part of Reel Hest's feature play, which is really a semi-extra feature, but one where you can land a big win or a succession of wins nevertheless.

The wild is the symbol that makes the game, together with the robber symbols that is. The wild is represented by a moustached cop who is hiding a doughnut underneath the officer's hat, but he can also substitute for any of the standard paying symbols plus catch a robber.

I enjoyed playing Reel Heist because I didn't have to wait for the usual three scatter or bonus symbols to trigger the extra feature. In Reel Heist there only needs to be one robber symbol in view for the street to sink in twilight and become staging ground for the ensuing chase.

Overall, I found the feature to be quite engaging because you can get it on any spin and as long as the robber is in view, you're staying in that mode.

Red Tiger Gaming has enabled 20p spins as the minimum wager even though Reel Heist has 40 fixed paylines. The payline arrangement enables multiple payouts to crop up from the same bet. What's more exciting than that is the payout structure.

The robbers' symbols can pay amazing amounts, but these can only interact with the wild symbol. Nevertheless, the paytable shows exciting possibilities as the petty thief, which is the one that's to occur most frequently on the reels, can pay up to 32x your bet.

Regular symbols can pay amounts that can be expected from a dynamic game like Reel Heist. The royal cards symbol category, which includes the ten card too, can pay between 4x and 200x your payline bet. Winning outcomes for four matching symbols can amount more than the bet and these aren't that rare to crop up.

One of the main reasons why I like games by Red Tiger is because the company is transparent about the volatility and hit rate levels for their games.

Reel Heist comes with medium to high volatility level and a frequent hit rate. Now don't go on expecting it's going to be a win on every turn, but the game doesn't arrange for long draughts and that's the positive thing about Reel Heist.

Browse casinos with Reel Heist and other slots from Red Tiger. Create an account and try the game for free before making a deposit.

You can play Reel Heist in English, Finnish, Swedish, German and 18 other languages. 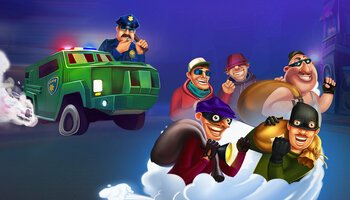