You know that expression, “Not all that glitters is gold’. This is definitely not the case when it comes to Reel King Mega by Red Tiger Gaming. Featuring a plump King with a small crown on his head, this slot game is a classic fruit game, with a modern twist.

You know the type, reels filled with fruit and standard cards. For better or worse, fruit machines have intrigued many players, so when this game fell into my lap, I had to give it a go. Partly because I’ve heard many good things about Red Tiger Gaming and slightly out of sheer curiosity.

To many UK players, this game is a solid reminder of nights out at the pub, spinning the reels while drunk on beer. Initially released by Barcrest, Reel King is a classic slot game found at most pubs in the UK and which Novomatic transformed into an online slot.

Once it was acquired by Red Tiger, it became Reel King Mega, providing a new generation of players with their own pub stories to tell.

Spread over five reels and with 20 pay lines, Reel King Mega is as you’d expect a fruit machine to be. Once I started spinning the reels, I was less than impressed. There is nothing flashy about this game, and there doesn’t seem to be anything extraordinary to captivate my attention.

The one thing that realty caught my eye was the Gamble Feature and most notably the Turbo feature. Perhaps it’s my Mediterranean blood, but I have very little patience when it comes to waiting for the reels to come to a halt. The Turbo feature speeds things up, so I won’t have time to bite my nails while waiting.

There is a retro feel to this Red Tiger Gaming title. The visuals have been stripped bare to basics, yet the reels are more prominent and spinning smoothly and seamlessly. Amongst the symbols found within the game, there is the King and the Queen which act as the highest-paying symbols, the Jester Wild which substitutes for all other symbols to help create winning combinations, the Bag of Gold coins, Plums, Cherries and regular playing cards.

Most conspicuously, there is the Crown that can crop up randomly and transform into a Wild. The King symbol can also activate the Reel King Feature.

Let’s go back to the Gamble Feature. This nifty feature is not an exclusive to this slot game as I’ve encountered it dotted across a variety of slot games. Substantially once you hit a winning combination, you are provided with the golden opportunity to gamble it and to double your winnings. Once you click on the elusive ‘Gamble’ button, you are transported to a different screen, where you are presented with a wheel and an arrow.

You spin the wheel and hope that the arrow lands on the green portion of the wheel. When that happens, you collect your winnings and have the option to either gamble it all again or to collect money. This is a nice touch added to a rather dull (I’m sorry, just sayin’ it as it is) game.

During the base gameplay, you can also trigger the King’s Crown feature, which tends to be generated quite a bit. The Crown sitting on top of the logo bounces around the reels, transforming symbols into wilds, including Super Symbols. When this happens, expect your bankroll to be increased by substantial wins.

The most considerable portion of the wins come from the Reel King feature, which isn’t activated in the traditional sense. As in, there are no scatters to trigger this round. Instead, it is triggered when all five reels are highlighted with a yellow background.

When this happens, up to five of a kind may pop up on the reels. The King himself will then spin his reels giving you between 2 and 25x your bet for three of a kind. This keeps going on until there is a losing spin.

As you can imagine, there isn’t much to write home about when it comes to fruit machines, but the folks at Red Tiger injected a gamification element to a rather tedious game.

I’m quite sure this game won’t have droves of players enthralled with it, but for a small niche of players, who have a thing for unsexy and less than charming slot games, they might find it appealing. Of course, you have the chance to win 500x your bet, and the Gamble feature alone is worth its salt in terms of entertainment.

I’m not a fan, but I think there are worst slot games around. If you are ready for a trip down memory lane, indulge yourself.

Browse casinos with Reel King Mega and other slots from Red Tiger. Create an account and try the game for free before making a deposit.

You can play Reel King Mega in English, Finnish, Swedish, German and 18 other languages. 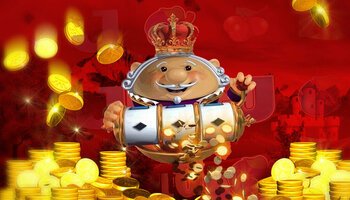