Reel Rush was a massively popular hit, so it would be fitting that NetEnt would make a sequel. Welcome to Reel Rush 2.

In 2013, NetEnt released a new game that broke the concept of what a modern slot can be like. Reel Rush was a major hit with the players, which meant that a sequel was bound to happen. In 2019, Reel Rush 2 was released, but this time the response wasn’t as positive.

Reel Rush 2 takes the idea of the original and tries to push it even further. Unfortunately, the direction wasn’t what people wanted and the sequel was met with a lacklustre sigh.

Reel Rush 2 is a lot more random game than the original. More features were added, that are all based on random events. The game also has a higher volatility and the RTP was lowered from 96.96% to a disappointing 95.53%.

Personally, I was just disappointed in this slot. They took a great game and made it worse. Whatever new was brought to the table did not improve the game for me. Graphics and sound While the first Reel Rush looked like a Super Nintendo game from the ‘90s, the sequel pushes the visuals a generation or two further. This time everything is in 3D and looks more like a mobile game. I also got a little cheap Saturday morning animation vibe. You know those shows, meant for kids with no real quality control.

Everything looks the same as the first game but in 3D. The background is basically the same landscape and the symbols on the reels are all the same. The question just remains, did you like the 2D better or do you like the more modern 3D look?

The soundscape simply works. The music has the same gimmick, where everything gets louder and more energetic the longer your combo is. The sound effects are all on par and fit the look well.

The symbols of Reel Rush 2 have a classic vibe in them. You have all the traditional fruit machine symbols, like strawberries, pineapples, melons, oranges, grapes and plums. In addition, you get the candy drop versions of them and one wild symbol in the mix.

The big thing about Reel Rush 2, and of course Reel Rush 1, is that you only have access to some of the squares on the reels. Every time you win, you open the playing field a little bit more and you get a free re-spin. If you can clear up the entire field, you are awarded with free spins.

The paytable in Reel Rush 2 is a bit wonky. Everything hands out very small wins and you need to hit a good combo to win anything. For example, with a wager of 20 coins, getting three drops will award you with 1 coin and three strawberries will give you 10. And let’s not forget that the strawberry is the most valuable symbol in the game.

The high volatility, lower RTP and the random features all work together to make this a somewhat unpleasant game. There is no middle ground here, it’s just all or nothing. If you can combo off with four or more re-spins, you are sure to win something, but that’s not an easy thing to do.

During the gameplay, you collect Super Tokens. These tokens can then be used to upgrade your Free Spins to Super Free Spins. When the free spins are activated, you get to choose if you want to upgrade. It takes 2,000 tokens to automatically upgrade them. You may decline, buy more tokens or you can gamble for the missing part. If you have, say, 1,000 tokens, you have a 50% chance of upgrading and 50% of losing the tokens. All the tokens you collect are stored even if you leave the game.

To get to the Free Spins, you need to open the entire playing field. You can do this either with the random cannon effect or by just combo-ing off. When the field is open, you get 8 free spins. Before the spins start, you can try to upgrade them to Super Free Spins with Super Tokens. The only difference between them is that Super Spins have a progressive multiplier.

At the start of every spin, three flatcars arrive in front of the reels. They may carry some random effects for this spin. What you get and how many items you get are completely random. Some effects are only available during the Free Spins or the Super Free Spins.

Reel Rush 2 was a disappointment for me. I love the original, but this just doesn’t give me anything new. All I got was a worse payment structure and random effects, and neither of those things are what I like.

The biggest problem for me was that this game is named Reel Rush. It had some pretty big shoes to fill, and it failed at that. This game is fine, no questions there, but it is nothing compared to what the original Reel Rush was. If this would have just been its own game, I would probably like it more.

Like I said, this game is fine. It is an average game, with average mechanics. For me, it is too chaotic, but some people will surely love that. You can go ahead and try Reel Rush 2 out, but just don’t expect the same revolutionary gameplay of the first.

Browse casinos with Reel rush 2 and other slots from NetEnt. Create an account and try the game for free before making a deposit.

You can play Reel rush 2 in English, Finnish, Swedish, German and 20 other languages. 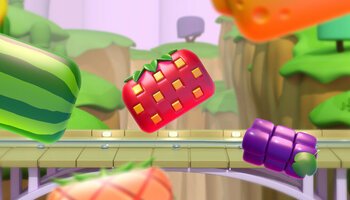