Reels of Wealth shows us the sizable treasury of some lucky character, and we’re dropped right in the middle of it to see if there’s anything we can carry out of there. This slot features jackpots, re-spins and multiplier wilds!

The game was developed by Betsoft and released in 2018, which makes it yet another slot where the graphics make it look a lot older than it is. The type of low-textured graphics with blocky animations and a fuzzy background make it look like a game that’s at least 10 years old, but it’s actually one of their newer releases. Maybe they do this for nostalgic reasons or perhaps it’s all they have time for, but I’m not a fan.

There is enough movement in the game to keep the eyes interested in this 5-reel, 3-row slot with 10 flashing win lines and having certain symbols become animated when they’re part of a win as well. Unfortunately, the setting doesn’t allow much in the way of characterisation. The background just shows some fuzzy images of treasure and the symbols in the game are mostly centred around that as well.

When it comes to the sound, the game plays something that’s focused on trumpets and drums, making it sound like an old-school jazz band. It somehow fits the setting pretty well but maybe that’s also because the theme is so generic. Still, I kept the sound playing for a while which means it wasn’t distracting or annoying me.

I already mentioned the graphics and how this applies to the symbols as well. There are quite a lot of them, making wins rather difficult to obtain. As a result, the game has a High Volatility. I thought this was accurate as there were extended periods of time where I wouldn’t get a single win. Keep that in mind while you play. The game lets you pick a bet between £0.10 and £100 per spin.

Something I did like, that a lot of Betsoft slots do but doesn’t count as a feature, is giving you the total cost if you use Autoplay. Setting a bet and then picking a number of spins will show you the total coins needed to do this, not counting any wins of course.

Reels of Wealth doesn’t go too far out of its way to introduce many special features. There are quite a few, but I didn’t think any of them merit a lot of explanation since most people will know what they are. Still, here’s an overview of what you can expect while playing:

Even though the game has a number of different features I didn’t find the slot to be very engaging. I was frequently only half paying attention or enabled Autoplay. It’s mostly due to the time between wins since even with the re-spin feature it was unlikely to get a lot of phrases.

Wilds all have a 2x multiplier applied to them which helped somewhat in making them worth the time but it didn’t make wins any more likely. Getting 4 or more re-spins in a row would also activate a larger multiplier. This could go up to a 3x multiplier on any wins and not just the ones with a Wild in it.

One big downside to this way of doing things is that there is no guarantee at all you will get any extra wins once you get 4 re-spins in a row. This wasn’t very likely to happen in the first place, making 5 or more re-spins a true unicorn and barely playing a part in the game at all.

The jackpots can only be won when the free spins mode activates, which didn’t happen a lot either. It only requires the player to get 3 Megastar symbols on the screen but even just one of these was extremely rare. In more than an hour playing I only hit the free spins mode once, and even then I didn’t feel like I was close to getting a jackpot.

The way to actually win the jackpot is to get the appropriate symbols to appear on the screen during the mode, filling up a bar that when filled will award that jackpot. Each jackpot has a shorter or longer bar, depending on how much you’d win.

I have to stress again how poorly Reels of Wealth looks, not just compared to other slots released in the same year, but also slots made by the same developer. The symbols are rather blocky and with no textures, the animations are not fluid and the background is very generic. It’s not just the style that is very bland but also the execution.

In comparison, the sound-design was a lot better even though it didn’t go too far. The features are plentiful but didn’t feel like they really offered a meaningful impact on the gameplay. Meanwhile, the high volatility made any wins rare but even when they did hit it wouldn’t be very high. I was forced to reduce my bets constantly to be able to keep going since it was largely a steady decline of my funds.

Players who enjoy the shot at one of the 4 jackpots might get a nice time, especially considering the max. win of 84,147x your bet. Players who are simply looking for a nice and casual slot to spend some time playing will probably do best looking elsewhere.

Play Reels of Wealth for free

Browse casinos with Reels of Wealth and other slots from Betsoft. Create an account and try the game for free before making a deposit.

You can play Reels of Wealth in English, Finnish, Swedish, German and 22 other languages. 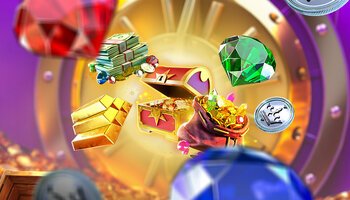