Reptizillions Power Reels is the tongue-twisting title of the latest Red Tiger slot. This game features a number of imposing dinosaurs roaming ancient lands, while the player sees a non-standard playing reel with walking wilds and free spins.

This slot game out in 2021 and shows off the amazing graphics that the studio is now capable of. The different dinosaurs take up a prominent place in the game. Even though the game has a massive 8-reel, 6-row playing field I felt like every symbol got enough room to show off its details. There are only 30 paylines in this slot which felt odd considering the size of the playing field.

There are a lot of small animations to be seen while playing the game. Different dinosaurs have their own animations, especially when they are sticky. This makes it interesting to see them move along the screen. In total, most symbols are unique to the game with only the 4 low-paying symbols as card suits that detract from the theme.

When it comes to the music, I felt like the game stayed a bit too close to the safe side. It plays a standard cheery song that doesn’t feel like it’s related to the setting at all. Maybe something inspired by Jurassic Park might have helped it. There are also not a lot of fitting sound effects, with dinosaur roars being the obvious choice. Instead, we only hear jingles and coins dropping.

Reptizillions Power Reels is obviously inspired by the prehistoric time when dinosaurs roamed the planet. There is no real narrative here, it’s not implied that the animals were brought into current days. This slot simply takes place in the past. There is a wide variety of different dinosaurs, some more or less recognizable. When part of the walking symbols mechanic they are animated, otherwise they don’t move at all.

Players will have to prepare for High Volatility when playing this game. I felt that this was largely due to the big playing field and only a limited number of paylines. Where most slots with a playing field this big use the consecutive reels feature, this game sticks to the classic way of counting wins. Players can augment their risk by picking a bet between £0.10 and £20 per spin.

If the player has symbols appear in the right places at the right time, they have a shot at hitting the maximum win of 4,473x your bet. This is actually a bit lower than average for a slot with this volatility. It’s also a lot lower than other new slots that often offer more than double or triple this jackpot.

Reptizillions Power Reels has a number of different features that differentiate it from other slots. The large playing field is the most obvious change, but there are other elements that also change the way the game plays. If that’s a good or a bad thing depends on the player.

First, a quick look at the different features present in the game:

Although the game has a non-standard playing field, it makes use of a standard number of paylines. This means that the game is actually quite reluctant to give regular wins. In my experience, my funds dropped rapidly because of this. There can be quite some time between 2 wins.

The colossal symbols that walk across the screen are the most interesting part of the game. During the base game, a colossal symbol can appear randomly while during the free spins mode, a walking symbol is guaranteed.

This symbol can be of varying size and will increase its effectiveness as its size increases since it’s more likely that matching symbols will be touching it and attach themselves. This creates a horde that can rapidly grow to fill multiple reels.

Reptizillions Power Reels is a great-looking slot that uses a theme that I think is criminally underused. Dinosaurs seem like a very obvious choice for a lot of slots but they are actually quite rarely seen as a theme. This game does a great job at presenting them as fearsome and interesting creatures.

The gameplay leans heavily on the colossal symbols and their walking wilds mechanic. The more the symbol is worth, the bigger the colossal variation will be. Once they start moving, they can have a big impact. It also frequently happened there were no symbols attaching themselves to the colossal symbol at all, making it pointless.

If you’re a player looking for something new and interesting, with a lot of dinosaurs, I would recommend this game. The high volatility is scary and I never felt like I had a shot at a big win, so do take that into account.

Browse casinos with Reptizillions Power Reels and other slots from Red Tiger. Create an account and try the game for free before making a deposit.

You can play Reptizillions Power Reels in English, Finnish, Swedish, German and 18 other languages. 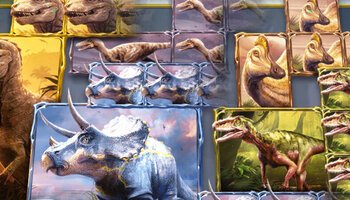