Reptoids are here - and they have indeed infiltrated the offices and even the White House! So, I guess the people with tinfoil hats were right…

Reptoids the slot game was released in 2017 by Yggdrasil, and it’s as funny as it is good-looking. In the world of the slot, the reptilians have managed to slip themselves into some important positions. Their objective is ultimately to have the full control of the world, so what better place to be than in the shoes of a high-ranking general or a president, even.

The myth of reptilians started from a fantasy novel, published in 1929 by Robert. E. Howard. But, the lizard people didn’t become a part of the conspiracy theorist’s beliefs until the early ‘90s. These days, several public figures have been claimed to be reptilians. Some of these alleged humanoids are the creator of Facebook Mark Zuckerberg, the actress Angelina Jolie and the former US president Barack Obama.

In this Yggdrasil slot, it’s your job to reveal the creatures before they can cause any more harm.

The introduction video at the start of the game is absolutely gorgeous. If I wouldn’t know any better, I could’ve easily said that I just saw a trailer from an upcoming animated movie.

In the video, we see a general walking confidently down the hallway and stopping before a heavily locked door. The floor has a logo on it that reads “Department of Global Defence”. The general inserts a key into a lock, then uses a key card and finally scans his hand. Inside, he reveals his true form and fights the humans inside.

Next, the camera cuts into a newspaper with the headlines about reptilians being real. When the camera pans back we can see it’s the president reading it. With a smirk on his face, he looks at the player and gives us a wink with his secondary lids.

The slot is simply beautiful and the characters are drawn with a distinct ‘60s or ‘70s style. Behind the reels is a map of the world presented with green dots, which is actually a nice touch - considering the Repto Detector shuffling around the screen and hunting the reptilians around the globe.

The music goes along with the game nicely, slowing down and picking up the pace with the rolling reels.

Reptoids has five reels, three rows and 20 paylines, going from left to right. On top of the base game, it’s possible to win free spins by revealing reptilians.

The highest win in Reptoids comes with five Scatters, which pays 5,000x your bet.

If one of the so-called humans land under the repto detector they show their true reptilian face. When this happens, the reptilian turns to Wild, as do the other symbols with the same character on them.

During the free spins, a reptilian who land on the same spot with the detector turns to Wild and stays that way until the end of the spins. As a bonus, every second caught reptilian awards you with two extra spins.

Reptoids is a medium-volatile slot with an RTP of 96.1%. With these stats, there are definitely better and higher-paying games out there. However, thanks to the level of volatility Reptoids can be easier on the wallet.

In general, playing Reptoids is easy and straight-forward. Yggdrasil has always done a superb job executing their slots and the control area so that it’s very user-friendly.

Personally, I love the theme of Reptoids, but the game could definitely do with more features. Hitting that one Scatter with the detector can take its sweet time, and once playing the free spins it’s all about hitting the reptilians to get more spins.

Browse casinos with Reptoids and other slots from Yggdrasil. Create an account and try the game for free before making a deposit.

You can play Reptoids in English, Finnish, Swedish, German and 18 other languages. 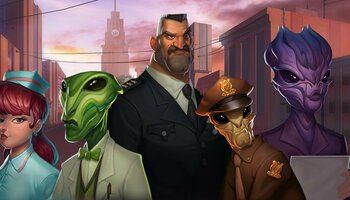