Retromania makes good use of the nostalgia factor a lot of people have that brings up fond memories of the past. This slot incorporates old technology to create a soothing, fun window into the past, aided by a bonus game and wilds!

Developer Endorphina released Retromania back in 2014, but it won’t show in the graphics. These are sharp, clear and well-done. They are also slightly animated whenever they’re part of one of the 9 paylines in the game. The entire 5-reel, 3-row slot is filled with images of items that have become obsolete over the years but which older players will no doubt recognise.

I thought the graphics were a very nice blend of modern design coupled with these things that were so prevalent in the 80s and 90s. There is a style that reminds me of stencils from that period, with even some allusions to cover art of famous music albums from that time period. Another bonus for me is that there are no card suits or card letters used to fill out the slot, keeping everything relevant to the theme.

The sound design doesn’t make as many strides to fit the time period. Instead, a lot of the sound effects seem to be stock sounds that are found in other Endorphina games as well. The main exceptions are some of the jingles that resemble those of famous sitcoms from 30 years ago, without actually being specific enough to know which shows they could be.

As mentioned above, Retromania makes good use of the style and items that were so common a few decades ago. The rather ugly, bland colours are a direct reference to the time period as well, creating a total package when it comes to the design of the game. There are quite a few animations in the game, mostly occurring whenever there is a win. These animations are brief but interesting enough for the eyes.

One thing I did think was a little confusing was the way the win lines were shown on the screen. Using small dotted lines around the winning tiles was difficult to see, considering the colour and style of the game. It mostly came down to watching the animations to see which symbols were part of a win. I did like that the total coin win briefly appeared on the screen as well.

With only a few different symbols and Wilds, the game has a Low Volatility as wins are rather frequent. Another thing to consider is the Pays Both Ways feature, which essentially doubles the number of paylines in the game. To balance this out, the symbols generally don’t pay out as much either. The lowest two symbols only make back your initial bet when you have a five-of-a-kind with that. Players can pick a bet between £0.01 and £90 per spin to increase or decrease the risks they take.

As with most Endorphina slots, Retromania shies away from having too many features cluttering up the gameplay experience. In actuality, there are only three notable ones.

Most of the game is centred around the base game. I thought this was perfect for players that enjoy a simple, classic slot experience where the main thing to do is watch the reels spin and see the different wins. Considering the low volatility and pays both ways mechanic, this happened frequently enough to stay interesting.

Players that enjoy getting big wins will probably not get so much out of this slot, as the payouts, in general, are very low and the special feature almost never activates. I only had the Bonus Game trigger for me twice during my time playing. I do have to say they both ended up granting me a substantial win but due to the low frequency, it balanced out.

The Bonus Game is activated when the player has 3 or more Bonus Symbols on the screen. 3 Bonus symbols grant the player 1 try, 4 symbols equal 2 tries and 5 symbols get the player 3 tries. Then the game switches to this Bonus Game which shows a 3-reel, 1-row playing field surrounded by a roulette square of sorts. The roulette square is filled with multiples of the symbols in the game.

Technically, the player has an infinite amount of spins unless the marker on the roulette square ends up on one of the 4 corners with a black cross. When the marker ends there, it reducts 1 try. When the player has no more tries, the bonus game ends. The goal is to get the marker to end up on a symbol that matches the symbols on the reels. Each symbol has its own payout value, and the more often a symbol appears on the reel, the bigger the win. Once the player runs out of tries, they are awarded the total coin win.

I thought the Bonus Game was the most interesting part of this slot and I wished there were more games that used this concept all the time. It was more fun to watch than the normal reels spin, but other players might think the reverse!

Retromania is an excellent effort by developer Endorphina to incorporate nostalgia into a slot without making it too obvious. The game feels like a museum of sorts, simply showing the different items without making things too audacious or annoying. Instead, they are fun images and quick animations that facilitate some good but profoundly simple gameplay.

I think the biggest downside to the slot is the poor sound-design which barely makes use of the setting or the time period it is based on. There is hardly any music and even when it is there, it’s only for a second. Considering the excellent work the team has put into the design of the game, it’s a shame they didn’t round out the experience.

Players who are looking for a simple but competent slot with an original setting will probably get some enjoyment out of Retromania. The max. win of 5,000x your bet is also very respectable. I would have liked to have seen the game make more use of the bonus game but as it stands, it’s a fun game to spend half an hour on.

Browse casinos with Retromania and other slots from Endorphina. Create an account and try the game for free before making a deposit.

You can play Retromania in English 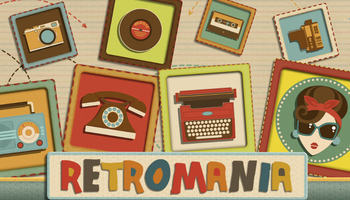