Return to Paris brings us back to the city of love as we watch how the policeman and the thief play a cat-and-mouse game. Set in the same world as the original A Night In Paris from 2011, this Betsoft slot gives us free spins, multipliers and wilds to play with.

Released in 2021, this sequel took exactly a decade to find its way onto our screens. The changes in the slot are apparent while still retaining its iconic look and sense of humour. I thought the graphics were very nicely done, sharp and colourful. There is a clear cartoony style that was also present in the original. All of the action takes place on a 6-reel, 4-row playing field with an average of 20 paylines.

Players can instantly see that they’re in Paris with the iconic Eiffel Tower in the background but also the quaint Parisian streets. The policeman and his dog are shown on screen at all times, subtly animated and sometimes reacting to what happens on the playing field. Meanwhile, the Thief only shows himself occasionally.

As for the music, the studio went for the rather obvious French-inspired music. It sounds good and could even be an original song. It fits the theme well, even though the energy doesn’t quite match up. The various sound-effects help show what happens, including sirens and the usual win jingles.

Return to Paris uses the normal selection of symbols. The high-paying symbols are all originally created for the slot, depicting different types of art treasures like busts and paintings. Meanwhile, the low-paying symbols are drawn from the normal card letters. I do have to commend the artists for at least trying to make these letters fit the theme. They are shown to be little stone sculptures.

Players have to contend with Medium Volatility when playing this game and in my experience, it felt exactly like that. The wins aren’t exactly frequent but they do trigger quite often. I found them to regularly be more than my bets, causing me to slowly go up. This also has to do with the multiplier feature of the game which I’ll get into later. The RTP is listed as 96.06%, almost exactly average.

If you want to make your bets smaller or bigger, the game allows you to do this. It’s possible to pick a bet between £0.20 and £100 per spin. There’s a maximum win of 1,056x your bet but this didn’t feel like much of an incentive. I thought that the regular supply of normal wins was a better reason to keep playing. Do prepare to play this slot for a while if you want to benefit from it.

Return to Paris still leans heavily on the idea of the cop and thief duelling with each other. This is translated into a number of features in interesting ways. First, a quick list of the active features you can find in the game:

During the base game, players see a row of symbols at the bottom of the screen with a counter that starts at 1. As players continue spinning, the Thief can appear and snatch a symbol. When that happens, the multiplier counter for that symbol increases by 1. The multiplier is applied to any win with that symbol.

Occasionally, the Cop will appear and select a random symbol. At that point, it will pay out a coin win as if the player had a 3-of-a-kind win with the multiplier applied. Then the multiplier is reset to 1. Each symbol has its own tracker and its own separate multiplier. During my time playing, the maximum multiplier seemed to be 10x.

Return to Paris feels like a worthy successor to the original. It has updated graphics and a distinct style that helps it stand apart from other games. The different mechanics are pretty interesting but likely won’t surprise anyone too much. When it comes to the sound design it also doesn’t really do anything overly unique.

The free spins mode is interesting since it doesn’t have a set number of free spins. Instead, it continues until the Cop captures the Thief. This could theoretically last up to 1,000 free spins but in reality always only seemed to take a handful of spins. This is disappointing since it was very hard to get the mode to activate in the first place.

If you want to play the sequel to the original A Night In Paris, this is obviously the game to play. Do you prefer the whimsical style or the slight change on familiar features? Then give it a try as well. For people that prefer more modern games or are looking for high volatility and a massive jackpot, this likely won’t satisfy those needs.

Play Return to Paris for free

Browse casinos with Return to Paris and other slots from Betsoft. Create an account and try the game for free before making a deposit.

You can play Return to Paris in English, Finnish, Swedish, German and 22 other languages. 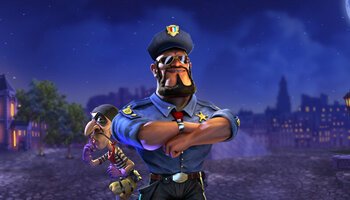