Rich Wilde and the Amulet of Dead slot review

Play Rich Wilde and the Amulet of Dead

Rich Wilde and the Amulet of Dead is the next instalment in the adventures of this intrepid archaeologist who just like other famous adventurers ventures forth in a slot with free spins, stacked wilds and multipliers.

The game is the latest story in the Rich Wilde universe, following this brave man as he delves into strange locations looking for treasure and relics. The slot is also developed by Play ‘n GO, just like the previous ones, and released in 2021. This means that we can feast on some excellent graphics as well as a number of entertaining animations. When it comes to its originality I’m afraid they didn’t fare as well as this game is yet another one set in Egypt.

Not that there’s anything wrong with Egypt or setting a slot there, but it seems that developers and designers ran out of inspiration for this type of game a long time ago. You can expect the usual Pharaoh and Ra symbols, a lot of gold, and a beautiful background featuring statues adorned with hieroglyphs. It all looks great, but it’s simply not enough to differentiate itself from other slots, including some of the previous Rich Wilde games.

When it comes to the game itself, it’s based around a 5-reel, 3-row playing field with only 10 paylines. This is low compared to other slots, and it also means you’ll have to deal with High Volatility. None of that is really a problem, it just depends on your own preferences. The game does let you adjust your bets to anywhere between £0.10 and £100 per spin, giving you some flexibility to deal with the risk.

Rich Wilde and the Amulet of Dead leans into its setting by adding a lot of Egyptian-styled symbols to the game. We can recognize some staples of the theme, including different animal gods, a golden pharaoh mask and the infamous book of the dead as a stacked wild. They are lightly animated when part of a win, helping them stand out a bit more.

Unfortunately, the low-paying symbols aren’t treated with the same level of creativity. These are simple card letters that are displayed as such. They have been augmented a little bit with random dots and gold bands to make them fit the setting a little better, but to me, they still stuck out like a sore thumb.

When playing this slot, players have the ability to win the max. jackpot of 5,000x your bet. I consider that amount to be the exact average for a slot with this volatility meaning players could potentially get the bang for their buck. However, I wouldn’t really consider this a valid goal to strive for and it’s more something that might happen accidentally. Instead, focus on keeping your funds steady and be glad if you can get some bigger wins.

Rich Wilde and The Amulet of Dead keeps things rather simple at first glance, not introducing too many features. That said, there are some decisions that stray from the norm somewhat so do keep an eye out.

First, a quick overview of the features:

Although this might look like pretty standard fare, one of the exceptions here is that there are two types of wilds that operate in different ways. The Scatter Wild, the Eye of Horus, will act as a Scatter for the free spins mode as well as function as a Wild. On the other hand, the Thoth Wild does not act as a Scatter but will expand to fill the reel it’s on. They both operate as Wilds though, substituting symbols that help create wins.

The free spins mode is only different from the base game by choosing a random symbol to count as an expanding symbol. This means that it can randomly turn other symbols into itself, creating the likelihood of a win. Unfortunately, this is entirely random and it can happen that it will only turn 1 or 2 symbols into itself during a spin, reducing its usefulness.

Rich Wilde and the Amulet of Dead is a worthy successor of the first couple of Rich Wilde slots. It sticks close to the theme and setting that was established with Rich Wilde and the Book of Dead, but it might have been too close. I found myself struggling to see the differences between the two games quite often.

When it comes to the gameplay, players shouldn’t expect anything too extravagant. The game still plays much like most slots, with wilds and free spins being the most important aspects. Players who want to see something more experimental will likely come off somewhat disappointed.

Still, I had a good time playing the game. The volatility was harsh but I managed to end up with slightly more than I started with. I would recommend picking lower bets if this is your first time with this slot since it might not go the same way for everyone.

Play Rich Wilde and the Amulet of Dead for free

Browse casinos with Rich Wilde and the Amulet of Dead and other slots from Play'n GO. Create an account and try the game for free before making a deposit.

You can play Rich Wilde and the Amulet of Dead in English, Finnish, Swedish, German and 30 other languages. 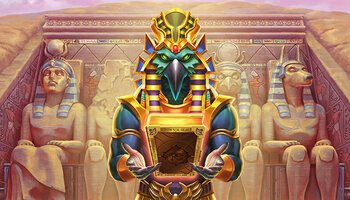