Rich Wilde and the Book of Dead slot review

Play Rich Wilde and the Book of Dead

Rich Wilde and the Book of Dead is one of those slot games that have received raving reviews, but which somehow, I never played, up until a few months ago. As a general rule, the more attention a game gets, the less likely I am to play it. The only reason I ended up playing it was because I received bonus spins on this game as part of a welcome offer.

This slot game sees our main protagonist Rich Wilde travelling to Ancient Egypt, chasing golden tombs in search for the elusive Book of Dead (I’ll let this typo slide away for now).

If you are not aware, there is an entire series based on this character. Other notable games in the same series, all made by software provider Play ’n Go, include Pearls of India and Aztec Idols. Each of these slot games come with their own themes and mechanics. The only consistent theme throughout all of these slots is that of adventure, and boy, what a journey!

Spread over 5 reels and three rows, this slot only features a total of 10 pay lines. Although this game was released in 2014, I find it quite shocking that it has so few pay lines. By then, most software providers were upping their game and going all out in terms of features and entertainment.

What I find a tad baffling when it comes to this game, is that it is remarkably similar to Novomatic’s Book of Ra Deluxe. Both of these games feature an adventurous hunk in search of treasure in Ancient Egypt.

In terms of graphics, it boasts a colourful yet vivid design with an exotic Egyptian soundtrack playing in the background. There are no flashy movie stills here, so the game is pretty basic in terms of visuals.

In total, the game entails 11 various symbols – 9 of which are standard symbols, and one free spin scatter symbol (The Book of Dead), which acts as a wild to substitute for all other symbols to help create winning combinations.

The most rewarding symbol is undoubtedly the main man himself Rich Wilde. Land 5 of him anywhere on the reels to earn yourself 500x your bet. Fill all the reels with Rich Wilde symbols on a single spin, and you’ll hit the jackpot, winning a whopping 5,000x your bet.

The Book symbol, as already mentioned, acts as both a scatter and as a wild in the game.

Some players might prefer the Free Spins feature over the Gamble feature and vice versa. The Gamble Feature is a unique feature that makes this game thrive.

Personally, I found the Gamble feature not to tilt in my favour much. I picked the Red colour circa 8 times in a row, and I kept getting black, but some players might prefer this extra touch.

I wasn’t particularly blown away by this game, neither the first time nor subsequent times. Since this game lacks exceptional mechanics or features, I found it lacking in terms of entertainment. Players who are just starting at gambling might appreciate it, but without the pizazz, you might come to expect from more modern video slots, this game falls short.

The Gamble feature is neat and potentially, this game’s main selling point. However, I can see it deplete your bankroll pretty quickly if you give it too much attention.

Although fast-paced, I found this game to be lacking in thrills, and perhaps a slot game with more flash and unique features could bring the game up to a climax.

Play Rich Wilde and the Book of Dead for free

Browse casinos with Rich Wilde and the Book of Dead and other slots from Play'n GO. Create an account and try the game for free before making a deposit.

You can play Rich Wilde and the Book of Dead in English, Finnish, Swedish, German and 30 other languages. 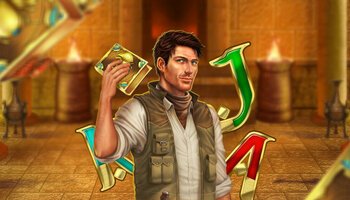