Rich Wilde and the Wandering City follows the intrepid explorer Rich Wilde, this time into a mysterious frozen city. While blizzards whip around us, we follow Rich as he explores a slot with free spins, multipliers and stacked symbols.

This slot was released in 2021 by popular studio Play ‘n GO, the creators of the previous Rich Wilde slots. While the previous games would largely be set in Egypt or tropical climates, we now see Rich dressed warmly for the first time. The background as well as the intro make it clear immediately that we are in new territories.

The game features a 5-reel, 3-row playing field with an impressive 243 paylines. We are treated to some impressive visuals even though a lot of the symbols are based on generic card letters. There are some animations that help things come to life somewhat, but perhaps not as many as I would have liked. We can see snowflakes drift down and the sunlight bounces off the impressive statues that frame the reels.

There is a fitting soundtrack that comes with the game, bringing a mysterious quality to the game. All in all, this results in the slot having its own distinct feel when compared to the other ones but feeling connected all the same. The various sound effects are more generic but don’t hamper the experience too much.

Rich Wilde and the Wandering City uses a selection of unique symbols with a higher value and card letters for the low-paying symbols. They all look great, with the card letters still somewhat recognizable but clearly redesigned. Now, they do look somewhat like ancient sigils that might be found on a frozen temple. I do appreciate the effort the designers took for this.

The slot has an RTP of 96.2% which is just a smidge above the average and comes with High Volatility. As always, this means players should expect long periods with no or small wins, sometimes punctuated with a bigger win. I found that my funds started to dwindle over time but not too quickly. However, I didn’t hit that bigger win that put me in the positives either.

Meanwhile, players can augment their bets somewhat to better deal with the volatility. The game offers the possibility to switch between £0.10 and £100 per spin. As an incentive to keep playing there is a max. win of 10,000x your bet. This is obviously a sizeable amount but players should keep the likelihood of winning in perspective. It’s always better to keep small attainable goals in mind. If the jackpot hits, that would just be a nice bonus.

Rich Wilde and the Wandering City hosts a few different features that change up the gameplay. None of these I would consider especially experimental or innovative. Nonetheless, they do a good job at keeping the game interesting.

During the game, players can see that there are multipliers attached to reels 2, 3 and 4. These aren’t always active but can be randomly triggered when part of a reel. This will cause the reel to light up so players can see when it happens. Any win that covers that reel will have the multiplier applied. If multiple multipliers activate at the same time they are added together to calculate the win.

The free spins mode was hard to activate and I only managed to do it once. The Scatters also count as wilds which has an up- and downside. The upside is that even when it doesn’t trigger the free spins mode they can still help facilitate a win. The downside is that because they might start a free spins mode, the developers have made sure they don’t appear that often.

Rich Wilde and the Wandering City feels like a worthy successor of the previous Rich Wilde games. It manages to update the graphics while still feeling like a game in the series. The gameplay was solid albeit somewhat dull. The different features just don’t have a huge impact on the gameplay because they don’t activate often enough.

If you enjoy the previous Rich Wilde games then I am sure this will also slate your need for the intrepid explorer. It also offers a solid standard slot experience with various features that aren’t rare or difficult to understand.

Players that are looking for something either more classic or more original will feel left out in the cold somewhat. There isn’t enough here for players with those preferences to stick around. The one unifying thing might be the massive jackpot. This might tempt some players to try it anyway.

Play Rich Wilde and the Wandering City for free

Browse casinos with Rich Wilde and the Wandering City and other slots from Play'n GO. Create an account and try the game for free before making a deposit.

You can play Rich Wilde and the Wandering City in English, Finnish, Swedish, German and 30 other languages. 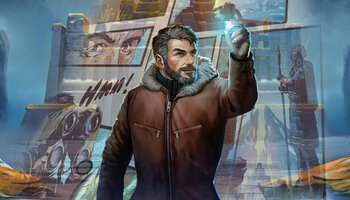