Welcome to Midgard, the mythical land inhabited by both humans and gods. Riches of Midgard: Land and Expand lets you walk among the Norse gods and claim your share of the wealth!

Released in December 2020, Riches of Midgard sets the scene in realm of Norse mythology. Here, you can meet Thor, Freya and even the one-eyed Odin himself scouting the land and seeking lost treasures. Midgard is one of the Nine Worlds, all held together by the sacred tree, Yggdrasil. But, even Midgard will not be spared when Ragnarök (“Fate of the Gods”) starts with a great battle, death of several gods and natural disasters.

But, let’s not get ahead of ourselves! While Midgard is still lush, waters bearing fish and forests full of game, the race is on for whoever finds the most riches. The slot holds various interesting mechanisms and also new and fresh ideas. Let’s take a closer look, shall we?

In Riches of Midgard, the reels are rolling on a very medieval-looking machine made out of wood and iron. The background shows us the peaceful scenery of the Midgard and a fjord surrounded by cliffs. Apparently, it’s spring, as the scene also has some melting snow and vague yellow spots in the grass could be sprouting dandelions.

I really like how the game looks, and even though I don’t completely agree with the cartoonish style of the characters, they do fit in the game well making it more colourful. However, I absolutely love the background music! The drums and the deep-voiced chanting makes it so nice to listen that I just kept the slot open as I wrote this review.

Overall, Riches of Midgard is 100% quality from NetEnt. The small details, like the flashing and rumbling lightning striking when Thor’s hammer lands the reels, makes it all even better.

Riches of Midgard has three reels and, during the base game, three rows with 9 paylines. By triggering free spins, you may get up to 7 rows and 29 paylines.

The paylines always go from left to right, meaning that the winning symbol chains need to start from the leftmost reel. However, after a re-spin, the wins are paid as scatter wins - so the winning symbols can be located anywhere.

Wilds can occur only during free spins.

The Hot Spot reels’ symbols do not count to the winning combinations. However, if the same symbol lands on both of the Hot Spots, this symbol can grow to stacked. This only happens, if at least two of the regular reels hold the selected symbol.

Before the re-spin, the selected symbols expand to stacked and cover the whole reel they’re on. The re-spin is initially a second chance to get the one missing symbol on the reels.

During the free spins, the Hot Spot reels can also hold Wilds which substitute all other symbols in the game (except for Scatter). Each Thor’s hammer awards you with two extra spins and uncovers either top or bottom reel.

Riches of Midgard: Land and Expand drew my attention at once with the interesting layout and, as I’ve loved NetEnt’s games, of course, I wanted to test this one as quickly as possible. The mechanisms of the slot were fun to learn and the free spins do present a nice opportunity for some heftier wins.

The Hot Spot reels lace every spin with more excitement, as they might trigger a valuable re-spin with stacked symbols. And stacked symbols mean more wins, and the re-spin can surprise you by landing more winning symbols. Oh yes, it’s all coming together. The deal gets even sweeter during the free spins when the rows get unlocked and activating up to 29 paylines instead of just the normal 9.

So, with everything looking as good as they do, how does the game actually feel like after a few hundred spins? I’d like to say that I enjoyed my time, which I did for a while but eventually kinda lost my interest. The free spins were almost impossible to trigger, and even with the increased number of paylines, the winnings were less than thrilling. Only after the test run, I noticed that the game only has the maximum win of 435x your bet, which would explain the modest payouts.

With medium volatility, Riches of Midgard is more of a game I’d play entirely for fun and passing time. So, naturally, it will probably do well with casual players who don’t want to take big risks and aren’t looking for substantial wins.

Play Riches of Midgard: Land and Expand for free

Browse casinos with Riches of Midgard: Land and Expand and other slots from NetEnt. Create an account and try the game for free before making a deposit.

You can play Riches of Midgard: Land and Expand in English, Finnish 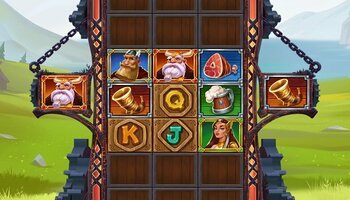