Steal from the rich and give to the poor with the gang of the one and only Robin Hood! Play ‘n GO released Riches of Robin in December 2019 and in the slot the prince of thieves show off his skills in archery as well as being the mastermind of heists.

Robin Hood with his Merry Men is back. This time though, we’re not in Sherwood but exploring a vast city of which beautiful scenery is dominated by a Disney-like castle. There is a lot of rich folk going around, but it also means there’s plenty of poverty with hungry mouths. So, Robin has his work cut out for him but that hasn’t stopped him before.

The game features not only Robin Hood but also his beloved Maid Marian. Of course, there’s also Little John, Friar Tuck, Will Scarlet and the minstrel Allan-a-Dale. The game is set after when Robin beat his arch-enemy, the Sheriff of Nottingham - now it’s time to get in new adventures and start helping the poor people of the city.

The slot has a fun theme that’s more or less known by all and on top of the basic game wins, it offers some nice bounty from free spins and three possible jackpots (non-progressive).

Riches of Robin is a beautiful game with a nice view of the city in the background. The background is very lightly animated with clouds moving, chimneys pushing smoke and flags waving in the wind.

Every character is also animated when they form a winning combination. Robin himself has a bit more life in him and when he substitutes a symbol he straight up pops out to shoot an arrow. I do like the design of the characters in general, but somehow I feel like all but Robin has some real personality. Little John is excited for seeing a butterfly, Friar Tuck is acting protectively over his chicken leg and Allan-a-Dale is playing his lute. Robin is just smirking at the player and looking handsome - for me, this looks like a missing opportunity to add something more to his character.

The music is the best part of the game ambient. The tone is set with lute music and when things pick up, the lute gets some company from tambourine and other instruments. I also like the wooden noises of the reels, it really gives the game a nice finishing touch.

Riches of Robin has five reels, three rows and 20 paylines going from left to right. In addition to the main game, it has several exciting features including free spins and three non-progressive jackpots.

The shadow of Robin Hood can randomly show up, which means his arrow may hit one of the money bags on the reel.

If his arrow hits a bag you win the prize it contains. The prize is marked on the bag and it can be either coins or one of the three jackpots.

Landing archery targets on reels 2 and 4 activate the free spins wheel. The wheel pics a random number of spins and the starting multiplier.

Landing the minimum of four bags on the reels triggers the Heist re-spins. During the feature, you get three re-spins and if you get at least one more bag with a re-spin, the re-spin counter goes back to three.

The re-spins go on until there are no more money bags appearing, or all of the spots are filled with bags. You then collect the wins from all of the bags you managed to stop on the reels.

I do like Riches of Robin, even when it is a highly volatile slot with rare big wins. The Heist re-spins and the Quick hit are nice features that liven up the basic game, so triggering the free spins doesn’t feel so necessary for experiencing something more than the base game.

Speaking of which, I’m not a fan of the free spins feature of this particular slot. I’ve never liked the free spin feature where the game gives out a random number of spins instead of always giving the same amount. It’s highly frustrating when I’ve been spinning hundreds of spins, then win the feature and have a measly four or five spins given to me. And on that note, I’ve never won the maximum of 20 spins.

Also, continuing about the free spins, I have noticed some technical problems with the slot lately - especially when the free spins get triggered. When the two targets are supposed to fuse together to form the wheel of luck, the screen gets stuck. So, the only way to get to see how the free spins go is to refresh the game or close it and open it again.

Anyway, I still like playing this slot, but I’d wait until Play’n GO has fixed the problem with free spins feature. The same problem occurs with the demo game so it’s easy to test out for free before placing any actual bets.

Play Riches of Robin for free

Browse casinos with Riches of Robin and other slots from Play'n GO. Create an account and try the game for free before making a deposit.

You can play Riches of Robin in English, Finnish, Swedish, German and 30 other languages. 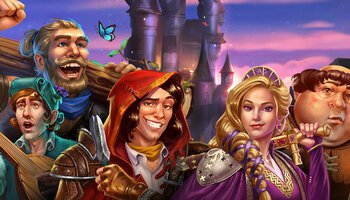