Riddle Reels - A Case of Riches is a Holmes-esque game of mystery with a payout potential of 5,000x your bet.

I am yet to see such an original premise crammed into a 3x3 layout, but hey, Play'n GO has done it and the game is rather exciting.

The gameplay involves four characters that are suspects in a mystery case, along with four murder weapons.

This is one of the few games of the Mystery theme that has a clue-collecting feature that's been done properly. Thanks to this detail I have added Riddle Reels to my "play again" list.

The highlight of the game is the board game bonus feature which involves four dice rolls, win multipliers and guaranteed wins - but I can’t overlook the base game either, because it can get pretty exciting here too.

The investigation has led to the discovery of multiple tools and weapons that may hold the key to solving the mystery.

Unfortunately, Riddle Reels - A Case of Riches isn't going to amaze anyone with the design. The symbols are rather ordinary, including the high-paying portraits.

There is a little bit of animation - enough to make them budge when they fall on a winning payline, but that's about it.

This doesn't make the game any less dynamic. Visual effects can liven up your screen when there is a winning outcome.

I think that it was Play'n GO's intention to focus the attention on the board game more than anything else. You will find the game quite playable if you ignore its dry graphic design.

For starters, Riddle Reels comes with Wild and Bonus symbols. When a Wild lands on a 3x3 reel set, chances are that your odds of getting a win will improve significantly.

Another notable detail in terms of the Wilds is that they can multiply your winning outcomes by 2x or 3x your bet.

The Wilds figure during the bonus feature and I am going to explain exactly how.

Scatter symbols are part of the base game. They are represented by an envelope with a big red question mark on it.

As per the usual, you need three scatters to trigger the feature, however, getting two from the same spin doesn't leave you with nothing.

Two scatters award a respin - for a chance to get a third scatter symbol or, potentially, a winning outcome.

If you don't get a scatter symbol, Riddle Reels awards you its Mystery feature.

The reels that have held the scatter symbol, as per the details above, will expand to cover all three positions.

These become Mystery symbols. They can convert into either one of the suspects or one of the weapons from the paytable.

In anticipation of the respin, the standard reel can reveal symbols which can match those on the mystery reels.

In other words, this is a surprise bonus feature that can award you with a decent winning outcome as a consolation prize for not triggering the main bonus.

This is the reason why I played Riddle Reels so many times. The main feature is entertaining and it can reward nice amounts of cash with the help of boosters and extra spins.

As I said above, you need three scatter symbols anywhere on the reel set to start the game. You begin with four rolls of the dice.

The "Sherlock Holmes" token, which is located on the board, walks up to one of the fields and triggers a clue.

Each clue that you collect along the way can fill one or two question marks. This detail comes into play later.

The clues can reveal extra spins and guaranteed wins. When you've used up all spins, the game will award you the Clue Points Wheel - but only if you have filled up the meter.

In the event, you spin the wheel with a red dial. If the dial lands in the blue portion of the screen you will get the Mega Spin.

Essentially, this part of the bonus can be either a guaranteed big win or a close call. The spin is set up in a specific way.

The reel in the middle is stacked with three Wild symbols with a 3x win multiplier. The remaining two reels can reveal a three-high stack of a Suspect or a Weapon. There is a high chance that either outcome will 'click' with the Wilds.

The major benefit of the Mega Spin is that you get three chances for a win - that is, three respins, with the Wild multiplier reel intact.

The range of bets is standard. You can play the game with as little as 10p per spin which helps if you just want to try it out.

One of the major positive details about Riddle Reels is the number of paying symbols. To be honest, I still can't believe that Play'n GO made all of the Wilds paying symbols.

Add to this eight standard paying symbols and you can see how Riddle Reels can reach a maximum payout of 5,000x your bet.

Not unexpected is the fact that three out of four low paying symbols shoot below your bet. On the other hand, winning outcomes for three high-paying symbols or three matching Wilds can pay significantly more.

Here are all of the winning combinations multiplied by your bet amount:

If it weren’t for the low-key graphic design and promotional banners, Riddle Reels - A Case of Clues would have been a lot better known among slot players. I like all of the gameplay and the hard specifications - you get 96.22% for RTP and medium volatility. The latter detail fits the style of the game. If it were high variance I wouldn’t have gotten a taste of the extra features on so many occasions.

Overall, this is a game worth exploring. 5,000x your bet for a max win potential is attractive, but in my honest opinion, changing upon a 3x or 2x Wild win outcome can feel just as good.

Play Riddle Reels - A Case of Riches for free

Browse casinos with Riddle Reels - A Case of Riches and other slots from Play'n GO. Create an account and try the game for free before making a deposit.

You can play Riddle Reels - A Case of Riches in English, Finnish, Swedish, German and 30 other languages. 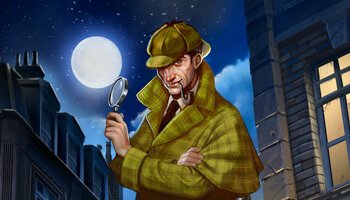