Riders of the Storm slot review

Play Riders of the Storm

Riders of the Storm isn’t unfortunately based on the famous song but instead follows a group of brave adventurers that literally ride the storm. Surrounded by lightning, free spins and wilds they venture out into the dark stormy sky to see what it holds.

The game was appropriately developed by Thunderkick and released in 2019. The graphics hold up quite well although playing the slot on a desktop monitor I did see some pixels, meaning that they didn’t scale well with a larger screen. Playing it on my mobile phone, the problem wasn’t there and the graphics were sharp. The symbols are all slightly animated and move a little bit even when they’re not part of a win on one of the 243 ways to win.

You play on a standard 5-reel, 3-row playing field which is filled with the usual assortment of symbols. The high-paying symbols all represent the setting in some way, containing different characters as well as various related items. Meanwhile, the low-paying symbols are all card letters which only show some creativity in their font. I think the developers use it as a source of familiarity, helping players determine which symbols are worth more or less without having to dive into the paytable.

Although the slot is set in a storm, the music is quite calm and offers little in terms of excitement. There aren’t even a lot of sounds you would hear during a storm like rumbling or rain. Instead, the game keeps it all pretty soft until the bonus game is triggered. It’s only at that point that it picks up somewhat.

Riders of the Storm is set in the heart of a storm, meaning we can see enormous thunder clouds in the background that are slightly animated. There are lightning bolts streaking across the screen as well. The symbols in the game are somewhat animated, with mostly the different characters subtly moving when they’re on the screen. Unfortunately, there are no extra animations whenever there’s a win apart from the tiles lighting up.

The game is listed as having Medium Volatility as it uses the consecutive reels mechanic but has regular payouts for wins and a rather large number of symbols. Players can expect some bigger wins during the base game but are more likely to get them when the free spins mode is activated.

To deal with this, it’s possible to pick a bet between £0.10 and £100 per spin. The larger bets will require a bigger pool of funds in order to last long enough for the free spins mode to activate as it proves hard to do. During my time playing, I only managed to activate it once after half an hour of play. Betting too high will likely drain your funds before reaching that part. On the other hand, the slot offers a max. win of 26,426x your bet.

Riders of the Storm has a number of simple features, most of which are either randomly activated during the base game or only triggered when the free spins mode is activated. To start with, a short overview:

The base game only has the Wilds and Stacked Wilds features that can activate during this part of the game. In my experience, the Wilds are frequent enough to help out creating wins but I can count the number of times I saw the Stacked Wilds on one hand. Don’t depend on it to get any big wins as it is too rare to be helpful.

When it comes to the free spins mode, this is also very difficult to trigger. Scatters are very rare to appear on the screen, and more than 2 was even worse. When it does happen, the game has 3 levels of free spins, with them being randomly activated. If you have the best one, you will get the highest symbol as a stacked symbol as well as a 5x wild multiplier. This however isn’t likely.

Riders of the Storm is an interesting idea and I think the implementation was done fairly well. The graphics weren’t very sharp when I played it on my desktop PC but it was probably intended for mobile users anyway. I think they could have done more with the setting though, as it’s barely established at all.

The features are okay if a little bland. The fact that most of them are hidden behind the free spins mode makes it difficult to ascertain their usefulness. Also, you can’t count on it activating very often since the Scatter symbols are rare.

If you’re looking for a rather standard slot with volatility that depends on you activating the free spins mode, this slot might be for you. None of the features will be a huge surprise and it’ll be easy to get a grasp on the game.

Play Riders of the Storm for free

Browse casinos with Riders of the Storm and other slots from Thunderkick. Create an account and try the game for free before making a deposit.

You can play Riders of the Storm in English, Finnish, Swedish, Norwegian

Riders of the Storm supports GBP, EUR, SEK, NOK and 2 other currencies. 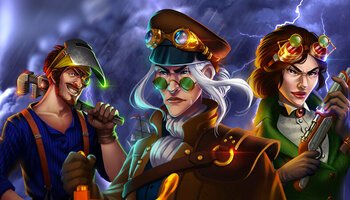