Ready to challenge the leader of the mighty Norse gods? Then step into the Ring of Odin for the ultimate battle.

Anything surrounding mythology seems to go down a treat with players and this slot is no different. Of course, it does help that Play’n GO has put so much work into it. This game is visually stunning and the engine behind it will keep you at the edge of your seat thanks to its high volatility. It is played as a 5-reel, 3-row slot with 10 paylines and a chance to win 5,000x the stake.

The engine will keep seasoned players happy. While the breathtaking graphics and thrilling score will also please the casual player. Add to that all the bonus features Ring of Odin has, and the frequency they seem to appear at and you definitely have the recipe for a winning title.

As soon as the game starts there is a short yet impressive introduction welcoming you to Odin’s temple. The game is set with this mighty temple in its background. On the reels there are a total of 10 symbols including the wild and the scatter.

The scatter tile is represented with a merciless one-eyed stare. These only appear on reels 1, 3 and 5 and when they do you are entered into the bonus round and awarded 4 free spins with Odin’s Ring active.

The wild tile is the big guy himself. Odin is featured looking regal and almighty (as he should be). The wild will substitute for any symbol bar the scatter and there are multiple wilds to be seen even within the same reel.

The other 4 low-paying symbols consist of different coloured runes. The red and blue runes will yield 10x with 5-of-a-kind on a payline whilst the purple and green ones will yield 5x.

During standard gameplay Odin’s Ring can activate at any time. A gold ring will come to the forefront and land itself bang on in the middle of the reels. Whatever symbol settles there will be the symbol you need to match in the next spin where the ring multiplies and occupies 9 tiles.

If any of these tiles match the symbol this will trigger the Draupnir Spins. During the Draupnir Spins the 9 tiles will change into the original symbol creating the possibility of some impressive wins. The number of Draupnir Spins is awarded according to how many symbols land on the 9 rings.

Odin’s Ring is not a sure-fire way of getting a great win. This is the catch with such high volatility slots. There is a chance that this feature will yield nothing. If the original symbol doesn’t make an appearance you won’t get any respins. And even if you do you might still leave empty-handed if the symbol doesn’t show on the first reel.

During the free spins round if a scatter symbol lands anywhere on the reels the player will be awarded an extra spin for each scatter. These free spins will be added to the original 4 free spin tally meaning a player will get more rounds with a newly activated ring. It is slightly complicated to explain but once played, this will make perfect sense.

It’s hard not to get excited when playing Odin’s Rings. First of all, there are the stunning graphics and soundtrack which perfectly complement the theme of the slot.

Play’n GO seem to be at their best creating such bangers, which is probably the only downside to this slot. With so many great Play’n GO games out there it is hard to find something that elevates this game from the others.

Then there is the engine which offers the high volatility experienced within this game. Yes, when the game is going your way you will feel those BPMs rising. However, there’s a chance of losing quite a bit of your funds before anything nail-biting does happen. This is not to say you won’t see many wins, but these are generally in the 5x to 10x range. During my gameplay I only managed to go into the 200x figure once. So if you’re more of a casual player you might want to keep that in mind.

Play Ring of Odin for free

Browse casinos with Ring of Odin and other slots from Play'n GO. Create an account and try the game for free before making a deposit.

You can play Ring of Odin in English, Finnish, Swedish, German and 30 other languages. 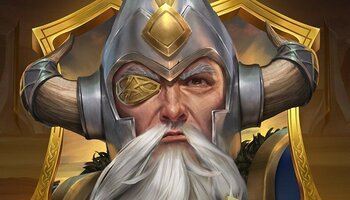