Step back in time to the mountain tops of ancient Greece - It’s Rise of Athena from Play’n GO. While the Gods of Greece have long since enjoyed their time in the slot spotlight, the goddesses have been somewhat under-represented.

Will the goddess of wisdom, handicraft and warfare prove to be a smart choice for Play’n GO? Or perhaps this slot will remain as flat as a pancake. Let’s enter the world of Rise of Athena.

Journey to the Temples

We join Rise of Athena on a sunny Mediterranean hillside, sheltered from falling olive tree branches by an ionic temple. If you were booked in here for an all-inclusive travel package, you probably wouldn’t grumble. Well, it looks a bit far from the beach but we shouldn’t complain too much.

Play’n GO seem to have the Athena theme under control with their Rich Wilde and the Shield of Athena, released in May 2020. With this slot, Athena manages to give her try-hard Indiana Jones the slip and take centre stage.

While our goddess seems to have been given a bit of a makeover - including a slightly quizzical look - Athena is a picture of eyebrow-plucked perfection. The slot frame itself is made up of glistening golden hues and calming blues, the perfect elements for a gateway to pure escapism.

Aspects of the Acropolis

For a slot that doesn’t quite fulfil my graphic needs, let’s hope the features can pull this slot from the foot of the mountain and rise, mighty, much like our lead. The features go like this: Free Spins Scatter symbols Wilds Sticky wilds Multipliers

Land three Owl symbols to enter the hallowed Free Spins with 12x Free Spins at your disposal. The Free Spins round is where you have the potential of taking down sticky wild multipliers. Multipliers come in the form of 1x to 3x, and can only land on reels 2,3 and 4.

The base game differs from the bonus game in that there are no sticky wilds. During the Free Spins round, sticky wilds will reduce multipliers by 1x per spin. Oh, and be aware - there are no retriggers in Rise of Athena.

The first 100 spins didn’t exactly endear me to the features, and it seems the lack of extras is a deliberate effort by Play’n GO to keep this slot minimal.

Symbols in Rise of Athena come with the following maximum values attached:

The highly volatile Rise of Athena is brought to you courtesy of 10 fixed paylines with a maximum win potential of 5,000x. Return to player comes in at 96.2% with the minimum bet set at £0.20 and £100 for the maximum bet.

Rise of Athena joins the huddle of slots that take mythological Greek characters as their inspiration. From a slightly cynical perspective, one might argue that game providers are trying their damndest to cover every possible character and every demographic.

There’s nothing wrong with minimal gameplay, not at all. We’re at the place now that as technology advances, competition between game producers is becoming fiercer and fiercer. For some, this means cranking out a slot with all the animated trimmings, jam-packed with features, sometimes to the detriment of loading times and mobile optimisation.

Rise of Athena feels uncluttered, with a breath of fresh Grecian air thrown in for good measure.

Play Rise of Athena for free

Browse casinos with Rise of Athena and other slots from Play'n GO. Create an account and try the game for free before making a deposit.

You can play Rise of Athena in English, Finnish, Swedish, German and 30 other languages. 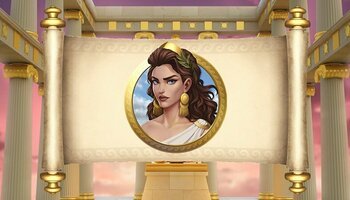