Rise of Dead is a game that will take the player to the darker side of ancient Egypt. Where mummies were walking around freely and the people had to be careful venturing into pyramids. The game further features free spins, stacked symbols and expanding reels.

If you’re worried that mummies and the title mean this is a horror game, fret not. There are some images of scary-looking mummies but they are mostly static and don’t do anything disturbing. The designers of Play ‘n GO simply went for a less explored portion of this ancient culture on the 5-reel, 3-row playing field that this 2019 slot holds.

The symbols in the slot are divided into the usual high- and low-paying categories. Unfortunately, the low-paying symbols are very basic card letters that do show a hieroglyph but the letter is obvious and filled in with a bright colour that doesn’t match the setting. Getting a win on one of the 20 paylines will trigger a brief animation and light up the tiles.

The high-paying symbols are a bit better drawn and show off some creativity. The different mummies all look distinct and offer the player something more interesting to look at. Other symbols include a Golden Scarab as a Wild and Scrolls as Scatters. None of it is terribly original but that’s the price of this setting which has been overused in my opinion. Meanwhile, the background shows that we’re inside some sort of crypt, which adds to the feeling of dread.

Rise of Dead comes with a regular-sized playing field and a moderate number of paylines, but a large number of symbols and features that aren’t terribly frequent. As a result, the game ends up with High Volatility. Players will see occasional wins happen through natural means but those won’t be very big and the low payouts for short win lines will not even be able to make back a single bet.

As expected, players can tweak their bets per spin by choosing one between £0.20 and £100. Considering the volatility it’s always a good idea to start off low and see how long it takes to trigger any of the features that might grant a bigger win. If you run out of funds before you hit that point, you’ll just leave disappointed.

Rise of Dead has a few interesting features that aren’t especially original but do change up the gameplay in some pretty major ways. The features don’t appear frequently which makes sense considering their ability to generate big wins. That’s not a guarantee, however.

The game takes place mostly on the main screen with the free spins mode only activating very rarely. Luckily, most of the features in the slot are present during the base game and make that part of the experience a bit more varied.

According to the developer, the most important feature here is Mega Stacks, which says that a regular symbol is picked to fill 12 consecutive spaces on each reel. The trick here is that obviously, the playing field isn’t large enough to show this entire reel. As a result, players will be unable to even see which symbol is picked because only one part of these stacked reels is on the screen.

In essence, it means that the player won’t even notice this feature as the reels look completely normal every time. It is mentioned explicitly on the first page in the paytable but the way it works is completely different in the game itself and I frankly never noticed it at all.

The feature that does show up is the Expanding Reels, which has reels 1, 3 and 5 hold the same symbol. This makes it a lot more likely to get a win since only reels 2 and 4 now require the same symbol as well. As I played the game, this did help in creating some wins but they weren’t quite big enough to feel like a good pay off.

Rise of Dead is a nice alteration of the usual ancient Egypt setting. The game features some interesting elements that I liked, such as the mummies and the expanding reels. The biggest disappointment was Mega Stacks, which was either badly explained or simply absent in the game.

If you don’t mind the setting and you’re fine with one of the advertised features not being present, I think Rise of Dead can be an enjoyable experience for those players that prefer a classic video slot.

The game won’t take long to learn, and it allows players to pick a bet between £0.20 and £100 per spin to deal with the volatility. The max. win of 5,000x your bet is about average for this type of slot, but it is still a good possible reward.

Play Rise of Dead for free

Browse casinos with Rise of Dead and other slots from Play'n GO. Create an account and try the game for free before making a deposit.

You can play Rise of Dead in English, Finnish, Swedish, German and 30 other languages. 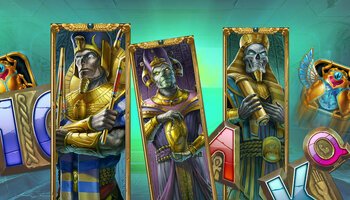