Open the spellbook of the legendary wizard in Play ’n GO’s magical slot, Rise of Merlin! But wait, the letters and pictures seem oddly scattered… Better find the mysterious crystal ball and let it show us our fate - and hopefully riches, too!

Play ’n GO released Rise of Merlin in 2019. Those, who have played the earlier games of said provider, might notice many similarities with the 2016 slot Book of Dead. Indeed, the mechanism is very identical to the Egyptian-themed game.

Rise of Merlin is based on the famous lore of King Arthur. The story includes a powerful wizard called Merlin, who helps Arthur rise to the throne. In some versions, Merlin is later described as the mentor of the king. Even though Merlin manages to acquire fame through his position and powers, sadly, he doesn’t get a happy ending while falling madly in love with the Lady of the Lake.

Lucky for us, Lady of the Lake only seemed to have an interest in medieval characters. So we’re free to step inside the Merlins’ hall and try to conjure the riches!

Rise of Merlin’s music is a blast to anyone who has played RPG games. The intensive, fantasy-like composition would be nice to listen as it is if only the fade-out would be better. Now the music loops poorly and the audio starts from the top very abruptly, breaking the atmosphere.

The game opens with a scroll, briefly explaining the free spins and the expanding symbols with a short animation. After that, we see the title, and then the game area shows up. The background picture has us set inside Merlin’s house, and before us is a peculiar magic circle with glass orbs surrounding it.

There’s not that much animation in the game, except the glittering and shining specs hovering behind the reels. The symbols stay more or less immobile until you spin a winning combination. In such cases, the illustrated symbols react shortly by moving.

At first, I did want to see more movement and action. Later, though, I came to the conclusion that having more moving parts might make the slot seem too hectic.

Rise of Merlin is very quick to learn and easy to play, so don’t worry about the difficulty level of this one, even if you’re still just a wizard-in-training.

The slot has five reels, three rows and ten paylines. Before spinning the reels, you’re able to adjust your bet by selecting the value and amount of the coins you’re using per payline. You can also decide whether you want to keep all 10 paylines activated, or play only with one, three or maybe five lines (select freely between 1-10). But I strongly recommend always playing with all ten paylines, since that way you get the best chances of winning.

After you’ve decided your desired bet, all there’s left is to spin, spin and spin! The winning combinations go from left to right, and you need at least two picture symbols or three letters or numbers on the same payline. They also need to be on adjacent reels.

The crystal ball, or orb, is both the Wild and the Scatter in Rise of Merlin. As a Wild, it substitutes any other symbol on the line, and as a Scatter you need at least three to activate the free spins. You can read more about the free spins below in the features.

Rise of Merlin has beautifully drawn valuable symbols, and the usual A, K, Q, J and 10. Naturally, the great wizard himself is the highest value symbol, paying 5,000 coins if you get 5 of them on the same payline.

On top of the basic symbols, Rise of Merlin has combined Wilds and Scatters into a single symbol, a magical orb.

I have to be honest; I love Play ’n GO’s games. I think there’s something in the detailed way they’re designing their slots that keeps me hooked. Not only are they usually highly invested in the graphics, but they’re also aiming for a nicely streamlined gameplay.

So it might not be a surprise, that I immediately enjoyed playing Rise of Merlin. Even if it is a highly volatile slot, it feels nicely balanced. Of course, as is the case with most slots with high volatility, the player is more prone to land on big wins on a long run rather than short sprints.

My guess is that Book of Dead was (and still is!) so popular, that Play ’n GO wanted to try recreating their success story. And did they do it? I definitely think so. Even though Rise of Merlin does carry a heavy resemblance to its predecessor, and in multiple ways no less, this Arthurian lore themed slot stands strong on its own.

Rise of Merlin might not be much more than a slightly tweaked copy of Book of Dead, but damn if Play ’n GO didn’t do an excellent job with it anyway.

Play Rise of Merlin for free

Browse casinos with Rise of Merlin and other slots from Play'n GO. Create an account and try the game for free before making a deposit.

You can play Rise of Merlin in English, Finnish, Swedish, German and 30 other languages. 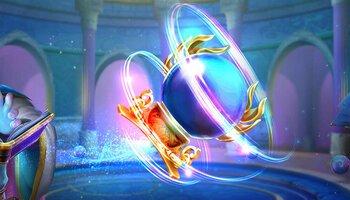