Robbie Jones and the Heart of the Nile slot review

Play Robbie Jones and the Heart of the Nile

Robbie Jones and the Heart of the Nile is a game about pyramid exploration that takes on a very unlikely look and feel for a progressive jackpot slot.

Anyone who is even remotely familiar with The Adventures of TinTin will see the semblance. It appears to me that the slot designers at Fugaso had been inspired by the famed French comic book. I actually like their approach because thanks to some boldness they’ve succeeded in not turning this game into any of the run-of-the-mill Ancient Egypt slots.

In addition to the uniquely bizarre graphics, the game comes with an unusual set of specs, such as 99 paylines that spin on a standard layout of three rows and five reels. Another element that defines the game is the second-chance respins that can expand on any winning outcome by adding more symbols for a bigger payout.

The cartoonish design can be misgiving, but Robbie Jones earns his Indiana Jones stripes by adding a finer edge to the gameplay, simply because this is a progressive jackpot slot that comes with three prizes. Because the game is interlinked across all casinos that participate in the Fugaso jackpot network, the amounts can soar quite high, which also depends on the game's popularity.

Nevertheless, considering both the extra features and jackpot prizes, Robbie Jones can shake out sizable payouts both in the base game and in the free spins bonus.

I can't describe the graphic design in any other way except by pointing out the obvious - the drawing style of the TinTin comic books is all over it. This is precisely why the game is unique and quite playable.

All of the symbols are animated and intertwined in the game's premise. What I got from the storyboard, as told through the symbols, is a story about a tomb raider who is on a mission to Giza to get to the loot before his adversaries do. Speaking of the adversaries, Fugaso has opted for a dark military force that’s been made out in a ridiculous cartoon-like manner.

And just like in any old school spy/adventure movie, the Robbie Jones slot too features a love interest that is represented by the symbol of a dot-eyed lady named Mary. As for the sound, the recurring musical theme is decent enough, but it does feel as if it's been lifted from an Indiana Jones b-movie remake and that makes reaching for the speaker button a preferable move early in the game.

Robbie Jones and the Heart of the Nile comes with a wild symbol in the base game and two additional wilds in the free spins feature. All three wild symbols substitute for the standard symbols.

By the same logic, Robbie Jones can make few scatter symbols grow to seven, eight or more. As long as you get three scatters on the reels, the game enters the respin mode until there are no more scatter symbols to be added to the final tally.

Players can play this pyramid raiding-themed slot with a coin value of one penny, but that amounts to 50p per spin because that is the fixed size of the bet. Upping the ante by adding a penny to the bet increases the total bet amount by 50p. Let’s not forget that there is a Level setting, which can go between 1 and 10, thus enabling a broader range of bets.

Over to the paytable, I find the payouts to be strikingly low, but this is only because they've been adjusted to reflect the payout potential of the Multi Win feature. So, if you land three of Mary's symbols, the payout is only 0.3x your bet, but any matching symbols that are added from the respins can bump the payout to 5x for five of a kind, and possibly more.

Robbie Jones' is the most valuable symbol. Five of a kind pay 10x your bet, four pay 1.5x and three pay 0.5x your bet. The category of low-paying symbols is only worth it if the winning outcomes contain five of a kind or more. Three of a kind pay between 2 and 4 coins, while four matching symbols can only trigger winnings between 4 and 10 coins.

I am going to start to wrap up my take on Robbie Jones and the Heart of the Nile with my last observation. The paytable isn't glorious, in fact, it is quite dismal considering the amounts of the low-paying symbols.

On the other hand, the free spins bonus pays double on all wins and the respin feature can result in higher payouts. I think that the balance is positively tipped by the fact that all winning outcomes continue with a respin.

There is one cringy detail that you can't consider - the theoretical RTP is only 92.26% because the game deducts 1%, 1.5% and 2% from all bets towards the Maxi, Midi and Mini progressive jackpots. Yes, Robbie Jones is a jackpot slot, but that leaves the base game with a return to player amount that is low by all standards.

Nevertheless, players should give the game a try, if not for the big win potential then just to check out the extra features and its one-off graphic style.

Play Robbie Jones and the Heart of the Nile for free

Browse casinos with Robbie Jones and the Heart of the Nile and other slots from Fugaso. Create an account and try the game for free before making a deposit.

You can play Robbie Jones and the Heart of the Nile in English, Swedish, German, French and 7 other languages.

Robbie Jones and the Heart of the Nile supports GBP, EUR, USD, CAD 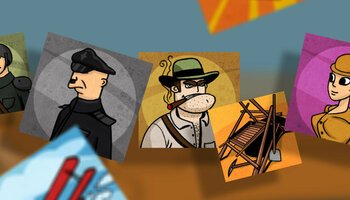