Robin Hood’s Wild Forest is a slot using the famous legend of Robin Hood as its source of inspiration. The game brings players into Sherwood Forest where they are treated to Sticky Re-Spins, Cascading Reels and Re-Spins.

The game was initially created and released by Red Tiger in 2020, featuring a standard 5-reel, 3-row playing field with a mediocre 10 paylines. It’s clear that the designers put more effort into the look of the slot than the slot, as on its face it only offers a rudimentary experience. The game goes wild on the Robin Hood angle, injecting a lot of famous characters and items into the slot.

The background shows us what appears to be Robin Hood’s hideout filled with looted gold. This does beg the question of why he hasn’t given it to the poor yet, but it does look nice visually. Meanwhile, the symbols in the game are highly detailed even though the low-paying symbols are simple card letters. Some of the special symbols activate animations that impact the gameplay, such as Robin Hood shooting an arrow to lock certain symbols in place during a re-spin.

In terms of sound-design, Robin Hood’s Wild Forest keeps things relatively simple but it does sound good. There isn’t really a special song that plays in the background, more like a perpetual sound-byte that keeps repeating. Certain wins play the sound of coins falling, others include a simple jingle or an arrow being shot.

The symbols in Robin Hood’s Wild Forest are all hand-drawn and most of them are made to look like they belong in Sherwood Forest. The exceptions are the low-paying symbols that are simple card letters, but at least these are seemingly mounted on a shield of sorts to somewhat fit the style.

You’ll find the following symbols in this slot:

The game is listed as having a Low Volatility which explains the relatively low payouts for even bigger wins, but in my experience, it did translate in a steady increase of my funds. The wins were pretty evenly spaced out across the entire time I played it, with these wins often making back several spins. Still, I was mostly dependent on some of the special features to get any big wins.

Robin Hood’s Wild Forest gives the player a selection of features that activate during the base game. As a player, you will not leave it to enter a free spins mode or a bonus game, everything takes place during the regular game. It is possible for a re-spin to activate but even that takes place on the main screen.

The fact that special features are activated by only a single Wild to appear is quite appealing and it also means that they activate easier. The real bottleneck is that these special features don’t appear that often.

On the other hand, it is possible for multiple Wilds to appear on the screen at the same time, enabling multiple features simultaneously. Obviously, this is very good for your funds since the features work very well together. I found the game to be consistently above my starting funds as I played as a result.

Players can pick a bet between £0.10 and £100 to augment their experience, which is always a good idea when playing a new slot. The max. win is 1,003x your bet which is pretty suitable for a game with this volatility. I should mention that I never had the idea I actually had a shot at it. I would imagine it requires all different features to activate at the same time to get anywhere close to such a jackpot.

In general, the features do add something to the gameplay without being distracting or annoying. The game stays on the base screen which means that you won’t be interrupted by the special elements. When they do appear, they often have a meaningful effect on the game and I walked away with extra coins regularly.

Robin Hood’s Wild Forest doesn’t win too many prizes when it comes to originality, but everything else is fine. The graphics are especially well done, with everything looking sharp and detailed. There are some animations but not so much that it gets overwhelming. It’s not the best game for new players since it does have a lot of features but people who are looking for something a little more expansive will have a good time.

I thought the volatility fit the experience I had. The game pays out enough to make it worthwhile without instantly letting you quit. It is possible to run a deficit for a while, at which point I would recommend taking a break and coming back later.

All in all, this game felt like a good time without really making itself stand out too much. The presentation is on point and the features were a fun and mixed bag that kept the gameplay interesting. I do wonder if people will remember it a time from now as it does little to make a lasting impression.

Browse casinos with Robin Hood's Wild Forest and other slots from Red Tiger. Create an account and try the game for free before making a deposit.

You can play Robin Hood's Wild Forest in English, Finnish, Swedish, German and 18 other languages. 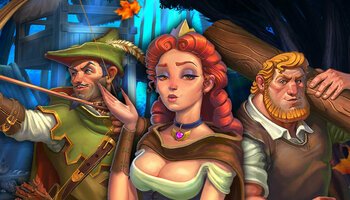