Legend has it that Robin Hood was the noblest of characters who could have utilized his prowess in archery to work for either one of the kings. Instead, he resolved for a renegade's life surrounded by mystery and one that he spent in hiding.

But his cause was noble and his name, real or invented, graces numerous movies, television series and this online slot by NetEnt. Robin Hood: Shifting Riches couldn't offer a better payout mechanism in view of the premise.

Players can discover that winning outcomes are followed by shifting reels and win multipliers. The game comes with a standard layout of 3x5 that spins across 20 paylines.

I was happy to enjoy this rendition of the Robin Hood theme because the game gives more than just the basic set of extra features. This characteristic is matched by a set of animated symbols that liven up the reel set with their celebratory moves.

NetEnt's designers have created a perfect setting for this Robin Hood adventure: a wood of ancient oaks steeped in autumn's golden-yellow foliage. The reel set hints at a game of hiding between Robin and his Merry Men and the Sheriff of Nottingham's armoured sentinels.

Robin Hood: Shifting Riches isn't shy about throwing character symbols onto winning paylines. When either of the picture symbols forms a winning outcome, the character springs into action by celebrating the occasion.

Friar Tuck sends a heartfelt 'cheers' to you with his pint of beer, Maid Marian strikes a martial arts pose with her knives, Robin comes out from the trees and shoots an arrow, and so on.

This graphic element of the gaming experience is in full unison with a perfectly orchestrated musical piece, which I find to be nothing short of amazing.

I was pleased to discover several things going on in the shape of extra features and random events on the reel set. This contributes to a more dynamic game than your typical online slot, and it can give the occasional boost to your winning outcomes.

I can say that NetEnt has made an ideal fusion between all of the extra features and the Shifting Reels payout mechanic. It all works perfectly as it doesn't overbear the gameplay, yet it can make tremendous improvements on the winning outcomes.

We have an interesting payout structure - one that doesn't take away from the winning potential on account of the win multipliers.

Starting from low to high, all symbols in the high-paying category pay between 0.35x and 0.75x your bet for three of a kind. Four matching symbols pay at least 1.5x, or in the best instance, 15x your bet for Robin Hood's symbol.

The most lucrative payout comes with five of Robin Hood's symbols - 50x your bet. In my overview of some of the payouts I didn't include the possibility of getting a win multiplier on the outcome. When you consider anything between 2x and 5x the winning outcome.

As for the low-paying category which consists of royal cards and the ten-card, it is expected that payouts consisting of these symbols are going to be more numerous, but then again, Robin Hood: Shifting Riches has enough going on in terms of extra features that even the low-paying symbols can be made to pay more.

The 20 paylines make sure that more winning outcomes don't slip through the cracks, which is exactly what I needed for a game that has low to medium variance. The RTP is favourable, at 96.75%, which rounds up a set of specs that I prefer.

Overall, this is a game that comes with a good payout potential and does well to generate a thrilling gaming experience. Chances for a big win should be sought in the free spins bonus, but as I said, this is an outcome that seems to be more apt at hiding than Robin Hood himself.

Browse casinos with Robin Hood Shifting Riches and other slots from NetEnt. Create an account and try the game for free before making a deposit.

You can play Robin Hood Shifting Riches in English, Finnish, Swedish, German and 20 other languages. 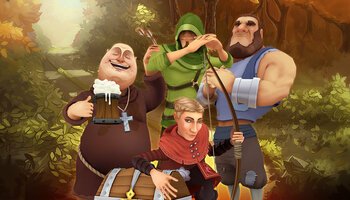