Robinson makes a trip to a tropical island where we check in on Robinson Crusoe as he attempts to survive on his own. Featuring a progressive bonus game, free spins and multipliers it is sure to be an exciting, wild adventure.

Set on a deserted island, this 5-reel, 3-row slot was developed and released by Evoplay Entertainment back in 2014. While the 3D graphics might have begun to look a little dated, the gameplay is still as fun as it was when it was first released. The colourful setting gives a lot of room for the creators to implement various fun animations as well as an intricate bonus game.

I found the music to be about what I’d expect from a slot set on a tropical island with a lot of bongo drums and a casual beat. There are a large number of different sound effects, most of them to do with Robinson as he reacts to things. When a monkey appears he screams which happened so often it actually got quite annoying.

Robinson features a collection of original symbols that are all relevant to the setting and the theme. Some of them are funny, like the face made out of pineapple, but most of them are simply elements you’d find on an island. When you get a winning bet line, the involved symbols are animated slightly. It wasn’t anything extravagant but I appreciated the effort.

The symbols you can find in this game include:

I thought the payouts were rather high considering the medium volatility, but as I noticed while playing wins are rather spread out so it made sense. The game doesn’t shower you with low value wins but instead spreads the wins out somewhat and then makes them a little bigger. As I played, I did find my funds dropping below the starting point and I never really recovered.

Players can pick a bet between £0.18 and £900 to compensate for that but obviously, be very careful when choosing to bet the maximum amount. In contrast, the max. win of 1,007x your bet seems small in comparison.

As I played more and more Evoplay slots I noticed that the developer tends to use the same features over and over. With Robinson, that’s only partially true. While the game does feature some standard elements like the free spins, the progressive bonus game is something I haven’t seen before. Considering the age of the slot I don’t think it’s likely we’ll see it make a comeback either.

To start with the obvious ones, the Free Spins mode plays exactly as it does in almost any other game. The mode itself doesn’t feature any special elements that change it from the base game. You’re just as likely to get a win here as you are when playing the normal game.

The only difference is that you get to pick one of 3 bonus cards when your original spins are done, granting you either a 2x or 3x multiplier or another 20 free spins. This is exactly the same as with other Evoplay slots like Lucky Girls and Monster Lab.

The Robinson symbol acts as a multiplier to any wins it is part of. This was confusing to me as the paytable doesn’t describe it as a Wild but it does act that way. Getting 5 Robinson symbols on a payline offers the impressive payout of 1,000x your bet, but I never saw more than 2 on the screen at the same time.

Robinson offers one original feature which is the bonus game. When this starts you’ll be shown 5 stone totems. The player is allowed to pick one which hides a coin win. The second round you’ll be shown the same 5 stone totems and are again allowed to pick one. This time, the game offers the same choice but one is hiding a Collect. If the player clicks on the totem hiding the Collect it will immediately stop the bonus game and award the total coins won.

Every round another Collect is added to the totems but the coin win for selecting the right totem also goes up. All in all, the game can go on for 6 rounds until all totems hide a Collect and the bonus game automatically ends. I thought this was a good way to do it as it guarantees at least one coin win in round 1, before making it possible to win more or end the bonus game with every subsequent round.

In my experience, the free spins mode triggers rarely but frequently enough to feel like part of the game. I liked that all the symbols are completely unique from the base game but the gameplay itself stays the same. The Bonus Game was rarer with me only triggering it once. The coin wins were also very low, even when I got to round 5.

Robinson is a game that combines some simple but effective features with outdated graphics. It’s not as bad as some other Evoplay slots like Prohibition but the age is definitely starting to show. The use of colours and animation does help obscure it somewhat and I was never turned off from the game because of it.

If you’re looking for a standard slot with some interesting but familiar features, Robinson will scratch that itch perfectly. None of the features will be completely surprising or new but the way they designed it made them fun to play nonetheless.

The volatility of the game and the maximum bet size do make it wise to keep your bet lows, at least at the start. I found the game to be pretty good to stay around my starting funds but betting too high would have almost certainly drained all my funds with no real opportunity to win them back.

Browse casinos with Robinson and other slots from Evoplay Entertainment. Create an account and try the game for free before making a deposit.

You can play Robinson in English, Chinese 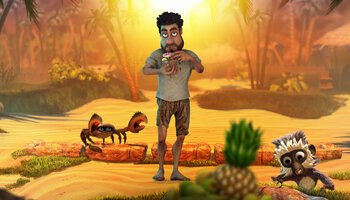