Robots: Energy Conflict takes us to a strange alien planet where there are many treasures to be found, but we’re not alone. Four different robots have also discovered this place and are battling it out over who gets to keep the spoils.

Robots: Energy Conflict is a slot developed by Evoplay Entertainment and released in 2018. The game has a distinct science-fiction feel with 4 unique robot designs that occasionally appear in the slot to battle it out while granting the player different advantages. The game plays on a 5-reel, 3-row playing field with 25 betlines.

The slot has fully unique symbols with most of them not too complicated but all of them are animated even when they’re not part of a winning betline. Meanwhile, the background shows us a dark cave that has floating crystals in it, making it rather unclear what the story behind this slot is but enough to make it interesting.

The music was extremely soft and in the distance, more a soft humming than any kind of actual music. When there was a win it would play a short electronic jingle I felt fit the science-fiction theme quite well. I also liked how the reels spinning made a zooming sound instead of anything harsher. All in all, the sound design was toned down and relaxed except when triggering the free spins mode when it became a little more energetic but kept with the soft electronic vibe.

The symbols in Robots: Energy Conflict either resemble different types of strange alien rocks or are special kind of robots. There are also stacked symbols that act as Scatters but they don’t have any other value except for triggering the free spins mode with a particular combination of robots.

The payout for wins is rather low in this game, even with five-of-a-kind wins. On the other hand, the game has a High Volatility since the game relies heavily on the free spins feature where different bonuses make it more likely to get a big win. During my time playing, I found that the free spins mode was often a source of substantial wins although not always big enough to refund me the cost of getting there. A max. win of 2.322x your bet is quite good, however!

During the base game, players will only deal with the Wilds. They showed up quite often and were moderately useful in creating wins. Still, I didn’t find them to create a lot of big wins which is where the coins are. As a result, the base game felt like an intermittent period between free spins and not actually an interesting and lucrative part of the slot.

I found it disappointing when I noticed there is no special background when the free spins mode starts, but I did like that the 2 robots facing off stand on either side of the slot, firing their weapons to change the playing field.

To start with, we have to talk about Kain. Kain is the antagonist of the slot who always appears during the Free Spins mode. Kain can corrupt 1 or more robot symbols in the game, signified by a green hue. When they’re corrupted they don’t count as symbols and they ‘drain’ the energy from the symbols surrounding them. When a symbol is drained they also don’t count when creating winning paylines.

I found this to be quite frustrating and it has cost me dozens of wins because they would simply disable 1 or more symbols on what otherwise would be a winning payline. If the corrupted robot symbols are evenly placed across the playing field, they can end up disabling up to a dozen symbols at a time.

The way to cleanse these robots is by having the special robot character perform their special ability and have it hit the robot. If that happens, the symbol is returned to normal and stops draining the energy. The downside here is that each character can only activate its special ability once before it requires 3 Wilds to reactivate again. I found that on average you can get about 1 Wild per spin, so with 8 spins, it means you can expect the character to use its ability twice.

If I tell you that Kain can corrupt 1 or more robot symbol per turn, you can see how this can quickly become a playing field filled with corrupted robots and these draining the entire field, meaning that spin after spin can result in no wins at all even when the needed symbols are present. For a game with high volatility and no real chance to win big during the base game, this felt like a huge handicap for the one part of the game that is supposed to compensate for the small number of regular wins.

I really felt like this was making things unnecessarily and extremely difficult, and the game should have a higher than high volatility, if that existed, because of it.

Robots: Energy Conflict is a beautiful looking slot with a tonne of animations and great graphics. The soundtrack is very toned-down but fits the aesthetic and I enjoyed the general ideas the developer had. I, unfortunately, found the features to be simply unfair to the player, stacking the deck in favour of the slot itself by adding a mechanic that the player has no way to deal with and that the special characters can only handle once or twice during a free spins mode.

It means this game is either for people that don’t play to win but simply want to relax while looking at a beautiful game, or people that believe that the high volatility is a challenge and they want to see what it takes to come out on top. With the ability to pick a bet between £0.10 and £300 this can go a lot faster than they might imagine.

If you like playing slots that feel like you have a fair shot at winning, Robots: Energy Conflict won’t be what you’re looking for. I enjoyed the special features during the Free Spins mode but it was severely hampered by the notion that the game was actively taking away wins, even though the coin wins weren’t that high to begin with.

Browse casinos with Robots: Energy Conflict and other slots from Evoplay Entertainment. Create an account and try the game for free before making a deposit.

You can play Robots: Energy Conflict in English, Chinese 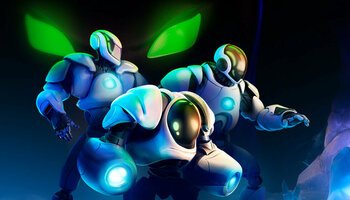