Rock The Cash Bar is a slot that uses the famous song by The Clash as a source of inspiration for a game that brings us to a busy bar. The bar isn’t just pumping the song out of the speakers but also comes with free spins, wilds and multipliers for the players.

When someone mishears a word or phrase and replaces it with something they think it says, that’s called a Mondegreen. The Clash’s Rock the Casbah is a famous example, as a lot of people mishear it to say Rock The Cash Bar which is something that developer Yggdrasil took as inspiration for this 2020 slot. It’s even more obvious when listening to the song playing in the bar, which is clearly based on the original track.

Although this idea is pretty original, does it fit well with the rest of this slot? That remains to be seen! The game is built up around a 5-reel, 3-row playing field with 243 ways to win. The symbols mostly show us different types of drinks as well as random fruits that you might find in your cocktail. The backgrounds show that the lights in the bar are working as well as doors to some special rooms.

The music obviously plays a part in the game but doesn’t really go too far when it comes to its integration into the idea. The song playing is clearly based on Rock The Casbah but done in an instrumental way with a piano and sounds almost the same but not quite. I suppose that does stay true to the intent of the slot, where the Mondegreen is the basis.

Rock The Cash Bar is a pretty standard slot in many ways. The graphics are good and there are some animations with the symbols but they don’t really elevate the game to a new level either. The symbols are all originally created for the game but that doesn’t mean they are all using original ideas. Oranges, for example, are not a new sight in any fruit machine.

The game comes with Medium Volatility which is a result of the standard playing field size, the number of paylines and the features that activate relatively often. However, you will not be granted a lot of larger wins while you play as the payouts for a win are very low. I found that it was especially difficult to get longer win lines and that really hampered how many coins I won.

Players can obviously deal with the volatility and the size of their wins by either increasing or decreasing their bets. The slot allows them to do that, making it possible to change their bet to a number between £0.10 and £100 per spin. Although the game’s volatility isn’t that high, I would still suggest starting off low and increasing it later, if you would want to.

Rock The Cash Bar has a lot of standard features but will use them slightly differently when it comes to activating them. The result is mostly that the free spins mode is activated in a different way and there are multiple levels of free spins.

The features you can find in this slot include:

The game relies heavily on the free spins mode to generate bigger wins for the player. There are 3 different levels depending on the bonus symbol that appears on the screen. During a free spins mode, it’s possible to get an upgrade symbol that will elevate it to the next mode. Multipliers, Re-Spins and Expanding Reels are features that are only active during the free spins mode.

This meant that I felt like I hadn’t experienced half the slot by only playing in the base game. It isn’t too hard to activate the free spins mode but don’t expect that to be instantly awarded either. Even with a number of free spins, it took me several attempts to even activate a re-spin. I also didn’t realise that there was an expanding reels feature until that point.

Rock The Cash Bar is a fun little slot that had a nice idea based on the misheard lyrics of an old rock song, but it didn’t feel like the creators ever had a good notion of what to do with it. Instead, they opted to create a bar with all the standard symbols that belong to it.

It felt like a bit of a wasted idea, even though the implementation is fine. Gameplay-wise I don’t have much to complain about except for the quite opaque way that the free spins work. I like the idea of having 3 levels of free spins but the way they activate and the features that come with them are not clearly communicated.

The slot has a max. win of 6,589x your bet which means that if you decide to test it out it could very well be worth your time, but I would warn you of the deceptive volatility. Even though the game isn’t shy about handing out wins they were only very rarely big enough for me to feel like I was actually winning.

Browse casinos with Rock the Cash Bar and other slots from Yggdrasil. Create an account and try the game for free before making a deposit.

You can play Rock the Cash Bar in English, Finnish, Swedish, French and 17 other languages. 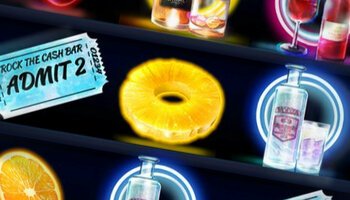