The nuclear missiles are flying when two rocket men are battling it out. Who will be the last man standing, Kim or Don?

Rocket Men is a peculiar game, as we don’t usually see slots that are so tied to a specific event in modern politics. The game heavily advertised on casinos and people got a kick out of a slot that made fun of some of the most powerful men in the world.

The rushed release schedule is very obvious and the game itself isn’t that deep or clever. Red Tiger tried to copy what South Park does, but couldn’t create anything nearly as deep or clever. Heck, even Mad Magazine is deeper satire than this.

For some, this slot might remind you of a classic computer game from the late 80s. Nuclear War also pitted caricatures of world leaders against each other in nuclear warfare.

Rocket Men is a cartoony satire of Donald Trump and Kim Jong-Un. The style choice is good, as doing a slot like this in any realistic fashion would probably be in poor taste. As cartoon characters, Don and Kim can be easily laughed at.

Unfortunately, there is no subtlety in the satire. It is all up in your face and nothing is left to the imagination. Don’s inappropriate groping and excessive golfing, and Kim’s overeating and trigger happy mentality are just there. There is no subtext, just pointing fingers.

The slot also has a rushed feel to it. The visual style looks cheap and quickly done, which isn’t that big of a surprise when you look at how fast this game was released after the rocket man incident.

I do like the musical choices in this. The marching band music that morphs into heavy rock suits the game well. It has that militaristic and patriotic vibe that US foreign politics is all about. What doesn’t work, is the sound effects. They are as stock as can be.

One thing that Rocket Men does right, is that all the symbols are clear and distinct. The slot has five card symbols from ten to ace and three high-valued picture symbols in it. There are also three special symbols, Don, Kim and the wild nukes.

Don is limited to only reel one and Kim can only show up on reel five. Each of them can activate their own bonus game if they show up alone. If both appear, they fight it out with three possible outcomes, Don wins, Kim wins or it is a tie. There are actually five bonus features that revolve around these two symbols.

All the big wins in this slot come from the special features. During the main game, you are just hoping that you can activate one of them, wishing you won’t lose all your money before that. The unfortunate fact is that the features just don’t activate as often as they should.

When I played this game, I felt like Red Tiger really was banking on people wanting to see all the special features in action. They are hard to get to and some are even chosen randomly when you get the required symbols. It is easy to lose everything before you get to experience everything the slot has to offer.

When Don shows up on the first reel, it is time to go golfing. Leave your presidential duties behind and take a couple of swings at the old country club. Don’s golf ball will break random symbols on the reels and new will fall down in their place. The new symbols then create more winning combinations and this goes on until Don gets tired.

If Kim’s symbol comes up in the last reel, it is time to drop some bombs. Kim will smash that red button and nuclear weapons will rain down from the sky. Some might actually hit the reels and become a wild symbol.

When both Don and Kim show up, they start fighting it out. If Don wins, it is party time. Donald gets to do his favourite thing, inappropriate grabbing, and you get to pick who to grab. You will always get a cash prize, but some choices will stop the game instantly.

When Don and Kim fight and Kim is the last man standing, it is boom time. Kim sets his eyes on the prize, which is the mainland USA. You have a map full of possible cash sums and a row of red buttons. If you hit, you get that prize and the rest will go up. Some rockets fall a bit short and if they hit the sea, it is time to collect your winnings and end the bonus game.

When Kim and Don are fighting and neither will back down, it is time to go for the big guns. Nuclear Spins is the free spin feature that goes on until one combatant goes down.

Don and Kim throw rockets at each other, which are walking wilds. If they collide, they just blow up, but if they make it all the way to the other end, they take a life point away. When either leader has had three hits, it is game over.

Rocket Men slot is a joke that gets old real fast. It is interesting in the sense that we haven’t seen many political slots, especially those that depict such a singular moment in time.

My guess would be that this slot is going to be remembered for a few years and then disappear. After Trump’s presidency is over, people will soon forget the whole rocket man tweet and this game will become irrelevant.

Rocket Men slot isn’t worth much by its own merits. If it weren’t for the theme, the slot would be a mediocre catalogue-filler. It is a mediocre game no matter what, but at least the theme is worth a chuckle.

I can’t say that I enjoy the slot. If you are interested in it, you might want to just see a video of it rather than playing it. I’m not going to put a single coin in it after this and will probably soon forget that the slot even exists.

Browse casinos with Rocket Men and other slots from Red Tiger. Create an account and try the game for free before making a deposit.

You can play Rocket Men in English, Finnish, Swedish, German and 18 other languages. 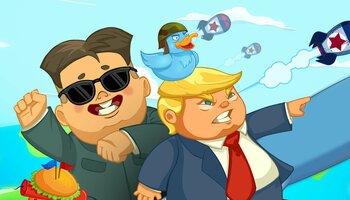