Betsoft's RockStar is a 30-payline slot game that packs a lot of amps and gear to try to make you headbang. Does it succeed at that? Well, that depends on how much you love or hate Guns ‘N Roses because the graphic design is all about spoofing that band.

RockStar has medium volatility which makes it possible to get winning outcomes across the board, but in my experience, the base game treated me to a lot of petty payouts and several that consisted of four matching symbols.

This is a game that has a very weak payout structure and a high-win potential with the bonus features. Right there, you are faced with a tempting decision that requires sustaining slim payouts for a chance to make a big hit with the help of the win multipliers.

I generally liked the game but there were few details about it that I couldn't stomach. Believe it or not, it comes down to the design.

RockStar takes you to a rock concert by a band whose members seem outright familiar. You've needed to have seen only one video by a certain American band to see a semblance in one of the most famous guitar players of all time (Slash) and the eccentric vocalist named Axl Rose.

Other symbols portray a record contract (because they've made it big), the band's photo on the front page of a magazine, a photo of a groupie, and so on. All of the symbols are stereotypical for a Rock N Roll-themed slot.

The thing that irks me about RockStar is the soundtrack. You can hear that Betsoft has tried to imitate a rock band, but it doesn't quite cut it. And each spin sends out a lead-guitar riff that is not in tune with the bass and rhythm section.

If you really love Rock music, you'll find this and the dissonant stabs annoying and there is no point in playing a Rock N Roll game with the sound off.

There are three features in the game that can redeem the mediocre base game and its faulty conception. I've played several Betsoft games from the same time period and I am happy to say that one of these features makes RockStar stand apart from the rest.

This is an instant-win bonus. To trigger it you need to land three or more guitars on a payline. This isn't a pick-me game so you'll get an aggregate win consisting of each bonus symbol. The end result is quite decent in my opinion, as I've won close to 1000 credits twice.

This is a simple yet anticipated bonus that revolves around the golden and platinum record symbols. These are wild and can land on the three middle reels. You can land an occasional win that can get multiplied by either 2x, 5x or 10x.

The main bonus of RockStar takes you on the stage where you are playing along with the band. Your job is to hit the tabs that come sliding down the electric guitar's neck.

The prize is determined by the number of tabs you can manage to click or tap with your finger. Since it isn't very hard to do this, you can easily get a decent prize that is relative to your bet.

There are 30 selectable paylines in this game. If you play on all 30 you can wager at least 30p per spin or more. It is possible to change the number of active paylines from the bottom of the screen or from the menu button if you are playing on mobile.

Regarding the payouts, I've already said I wasn't impressed. RockStar is one of the weakest games by Betsoft in that regard, however, the low payouts can be offset by the wild multipliers.

None of the nine symbols can return the full bet for three of a kind. The contract, whiskey, groupie and two magazine symbols can pay between 0.06x and 0.2x your bet.

It's obvious that the amount of the potential winning outcomes in the base game depends on the wild symbols. Without the wild, the most that you can make is a little over three times your bet. In the best possible outcome for a single payline win, you can get 33.33x your bet with the help of the 10x multiplier wild.

RockStar is a decent game and the low payouts are balanced by a quick hit frequency. I've had all three bonus features trigger inside 150 spins and it was fun to see it happen.

If you want to test the game you can play on fewer paylines and see how the volatility pans out. The RTP is 93.84% and that's below the average.

Browse casinos with RockStar and other slots from Betsoft. Create an account and try the game for free before making a deposit.

You can play RockStar in English, Finnish, Swedish, German and 21 other languages. 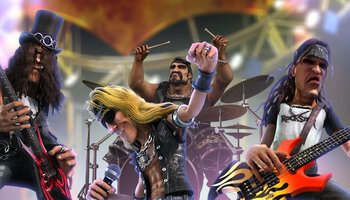