Rome: Caesar’s Glory is a slot that takes its inspiration from the ancient Roman emperor that is both equal measures famous and infamous. This game also takes a unique approach at the classic slot with non-standard reels, stacked Wilds and free spins.

This slot was released in late 2019 by developer Playson who have a library of wildly varying quality so it is always a mystery what to expect. In this case, Rome: Caesar’s Glory immediately shows that they’re willing to change things up yet again. The playing field consists of 6 reels in increasing size, starting with 2 rows and ending with 7 rows. In the free spins mode, this is reversed instead.

The game has a total of 64 paylines even though the game has tapering reels. When there’s a win, the game lights up the involved symbols. The symbols themselves aren’t anything special. They look good but are rather uninspired and not animated. The background of the slot shows us a massive army standing at attention but this is also a static image. I feel like having some animations might have been a nice addition but alas.

When it comes to the sound, the music is pretty bombastic and I feel like this is a good fit for the style of the game. It didn’t strike me as particularly Roman or even classical but it gives the game a sort of movie style. There are a few different sound-effects and although they’re original, they aren’t particularly suited to fit the setting.

Rome: Caesar’s Glory has a selection of symbols that are divided into the usual high- and low-paying categories. The low-paying ones are unfortunately just simple card letters. I think they could have used the famous SPQR if they really wanted to use letters, but they opted for the simplest option instead.

The high-paying symbols are things you would associate with the Roman Legions, with Caesar counting as a Wild. None of these has any meaningful animations, not even the Wild. Only getting a win will trigger any sort of movement, lighting up the symbols involved and displaying the paylines.

As can be expected the slot has High Volatility, which translates in very rare regular wins and waiting for the Free Spins mode to activate. Still, I found my funds to do quite well as long as I kept my bets relatively low. To do this, players can pick a bet between £0.20 and £100 per spin.

Even though the game has a weird presentation with some odd-looking reels, the rest of the slot stays relatively simple. There are a few features that augment the gameplay further but those should be quite familiar to most players.

During the entire time playing, the non-standard reels were the only constant but they felt like a hindrance the entire time. Even with 64 paylines, wins were very sparse during the base game. The Wilds weren’t exactly forthcoming either, and when they did wins were unlikely due to reel 1 only being 2 rows.

This was a sharp contrast with the free spins mode, where the size of the reels was reversed and this increased the likelihood of getting any wins. The added benefit was the more useful Wilds which would expand to fill the entire reel they were on. Wilds were about as frequent during this part of the game so it did still happen they didn’t appear.

It wasn’t too tricky to activate the Free Spins mode as the Scatters were quite common. Players that receive more Scatters will receive more spins. Additionally, getting Scatters on the screen during this mode will add additional free spins to play with.

The final element to mention is the Stacked Wilds tracker. Whenever the Wilds fill an entire reel this will increase a counter that goes up to 275. Once this number is reached, it will immediately activate the Free Spins mode. I found it rather difficult to reach and the Free Spins mode isn’t anything special, but considering the volatility, it’s a nice addition.

As a history buff, I quite enjoy games that use history as a source of inspiration, especially when it isn’t Egypt or pirates. Rome can also be a common inspiration but with Rome: Caesar’s Glory the developers, unfortunately, left some room for creativity unused. Instead, the game plays fine but does little to take advantage of its source material.

The gameplay in Rome: Caesar’s Glory is pretty close to standard even if the non-standard reels make it look different. You are still playing with regular paylines that count from left to right, which often works against itself. Getting any win during the base game is extremely rare and can be frustrating.

The different features do an alright job at keeping the game entertaining as you wait for the free spins mode to activate. Players can look forward to a max. win of 1,700x your bet which isn’t very high but lets people work towards something.

Browse casinos with Rome: Caesar's Glory and other slots from Playson. Create an account and try the game for free before making a deposit.

You can play Rome: Caesar's Glory in English, Finnish, Swedish, German and 19 other languages. 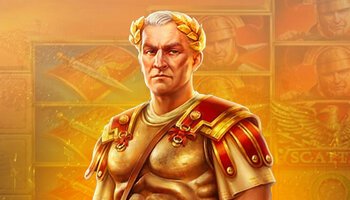