Rook’s Revenge lets the player view how the Mayan man named Rook gets his revenge. On who and why we don’t know, but we can be assured that it will involve cascading reels, multipliers and a free spins mode that players can take advantage of.

The game has been around for quite some time, being released by Betsoft back in 2012 which the graphics do give away somewhat. All of the symbols, the background and the main character are rendered in 3D which notoriously doesn’t age well and is probably why most slots nowadays incorporate drawn art.

Still, this 5-reel, 3-row slot has a lot of character and brings the setting to life. Rook, the main character, stands to the side of the playing field. If there’s a win on any of the 25 paylines he will do a little dance, giving players a sense of movement. Another element that helps with the setting is the background, which shows the jungle and Mayan temples.

The symbols in the game are pretty simple in contrast, mostly depicting abstract masks that represent different animals or people. Although this is obviously not as interesting to look at, it does help with the game’s quick pace and allows players to see if there are any wins.

Rook’s Revenge holds quite a large number of symbols. Coupled with its features and the number of paylines, the game lands on High Volatility, which I felt was not very noticeable during the game. However, this is because although the game does grant you wins rather easily, they aren’t very rewarding until you have a number of them in a row. That is where the volatility comes in.

Since the game has high volatility, it’s a good thing the game allows players to pick a bet between £0.1 and £125 per spin to mitigate or exaggerate the risk. Players that are especially fortuitous can win the max. win of 18,640x your bet, which is amongst the highest bets available right now.

Rook’s Revenge makes use of a few standard features that most players will be familiar with, but that is put together in a combination that isn’t quite as common. As always, that is what counts to see if a game is interesting to play and not so much the features themselves.

The features include are:

Using the cascading reels feature, the game is able to grant the player a steady stream of wins but these aren’t very high if there are no consecutive reels. This combines high volatility with an interesting gameplay experience that keeps players engaged.

Triggering the free spins mode isn’t a guarantee that players will walk away with any big wins, but it does make it somewhat more likely. The free spins mode doesn’t have any special features that help in getting consecutive wins, it only makes the ones that do happen bigger.

All in all, the features don’t play a huge part in the gameplay in how it creates wins. Instead, they are offering players the opportunity to get more and bigger wins.

Rook’s Revenge is an older slot that has aged surprisingly well. Even though the 3D graphics aren’t as pretty when compared to newer slots, the animations and the use of colours and original symbols does help in keeping it feel fresh and relevant.

The gameplay is a mix, with the high volatility closely related to getting consecutive wins. Players who aren’t able to do that for long enough will notice a steep decline in their funds, while those who are able to do it will likely walk away with some bigger wins.

If you’re looking for an older slot that still offers some solid gameplay, as well as the ability to win one of the bigger regular jackpots around, you should definitely consider trying out Rook’s Revenge. Players that are only interested in either experimental or cutting edge slots will probably not find what they look for here.

Browse casinos with Rook's Revenge and other slots from Betsoft. Create an account and try the game for free before making a deposit.

You can play Rook's Revenge in English, Finnish, Swedish, German and 22 other languages. 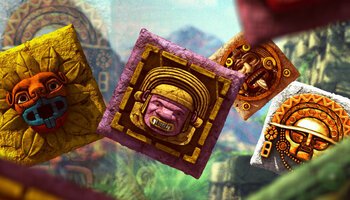