Route 777 takes us along a long, deserted highway in the American midwest. This route has clearly seen better days, but who knows. We might encounter scorpions, tumbleweeds, a bonus game, and free spins.

While Route 66 is quite a famous landmark in America, Route 777 is an original creation by Elk Studios which released in 2017. It still borrows heavily from the real Route, however, especially in its depictions. The 3-row, 3-reel playing field with an impressive 17 paylines for such a small slot is imposed over an image of the route itself.

The images in the game look very good. The background shows a part of Route 777 with a classic midwestern desert vista. There’s also an old-school gas pump on the side of the screen. The symbols in the slot are not terribly original but they are sharp and detailed, and they all seem to be original for this game.

Even though it doesn’t really feel that way judging by the looks, Route 777 is supposed to borrow heavily from the metal scene. Some of the symbols are related to this music style as well as the graphics that are shown above the reels. To really drive this point home the music is also a heavy metal style, with electric guitars and drums. It didn’t really connect for me, but I respect the effort.

Since the game only has a small playing field there aren’t too many symbols. Most of them are the usual types that you would find in classic slot machines but given a slight redesign. Others are made for the slot, again in keeping with the metal theme that seems to be associated with the Route.

Something to mention is the special screen above the reels that shows different images. It rotates between random ones like scorpions and tumbleweeds during the base game but also shows the coin wins and special features when they activate. I thought this was an original way to show it but I felt it also didn’t really add anything to the game.

Since the game only has a small playing field and resembles the classic slot machines, we don’t have to expect a lot of features. Route 777 doesn’t even have Wilds. It does have a special free spins mode and a bonus game, both of which are connected.

The re-spins were the only thing that was active during the base game, seemingly activating whenever reels 1 and 2 had the same symbols on them. At that point, these reels became locked in place while the third reel re-spun up to 5 times in a row. It did help in granting wins but it was never a big winner for me. It could help in activating the Free Spins mode, however.

The Free Spins mode activates when there are 3 Bonus Symbols on the screen. This happened relatively often in my experience. The player always receives 5 free spins plus a random number of additional spins.

The Free Spins mode plays exactly the same as the base game, including the locked reels and the re-spins. This could even help facilitate the bonus game if the reels ended up correctly.

Getting the 3 Bonus Symbols during the Free Spins mode activated the bonus game. During this time, a wheel is spun. The wheel is covered with the 4 differently coloured 7s. Hitting the same colour 7, 3 times in a row will grant the highest possible coin win, depending on the colour. The biggest win comes from hitting the Crowned 7 three times.

Either way, the game grants the player the coin wins before returning to the free spins mode if there are spins left.

I found that both the Free Spins mode and the Bonus Game activate often enough to be interesting but not so often you can depend on them. Most of the time I would be playing the base game, which unfortunately felt rather dull. Still, activating the Free Spins mode would almost guarantee some big wins.

Route 777 is in many ways a standard classic fruit machine, updated with some nicer graphics and a fitting soundtrack. I thought the setting was a nice tough but rather underused. Still, I don’t think they could have done much with it considering the slot itself.

The LCD screen above the playing field was a nice touch, adding some extra atmosphere through blocky graphics. I also liked that it displayed the different special features and coin wins even though it wasn’t necessary.

If you like a game with a few simple but interesting features and the opportunity to win the max. win of 4,000x your bet, I would recommend Route 777. Players that are looking for a faithful rendition of the classic fruit machine or a very modern video slot won’t find that here. The final thing to mention is that players have the opportunity to pick a bet between £0.20 and £100 per spin to augment their experience.

Browse casinos with Route 777 and other slots from Elk. Create an account and try the game for free before making a deposit.

You can play Route 777 in English, Finnish, Swedish, German and 19 other languages. 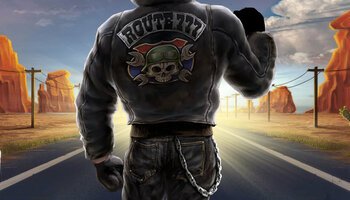