Royal Fruits 40 is a perfect slot with nothing extra added. This is simplicity at its finest with an abnormally high RTP.

When a new game developer enters the market, they commonly do one of two things. Either they release just a few unique games or they go all out and give the players everything they could possibly want. NetGame Entertainment took the latter route and within their first year, they released a massive amount of games.

One game that every large catalogue has, is an old-school fruit machine. For NetGame, that slot is Royal Fruits 40. This is a game with no bells or whistles, just simple gameplay.

That might not sound very interesting, but there is a reason why these games still see a lot of play. They usually have very high RTPs and Royal Fruits 40 is no exception. It has an RTP of 97.71% and that is paired up with low volatility to make the game more balanced.

Royal Fruits 40 takes its influences from the classic fruit machines. The slot has a modern feel to it, but you can easily see where this game comes from.

The slot has a small royal theme in it, even though it can hardly be called a theme. It only shows in the name of the game and on one symbol, a crown.

Nevertheless, the game looks good. Everything feels brand new and has a shine to it. Even though the game doesn’t have much personality, it ain’t too bad to look at.

The same can be said about the sound and music. The game sounds good, but it’s nothing that would stick with you. The only thing that was a bit odd, was the grandiose music. It felt a bit over the top, especially when there aren’t really any visual effects to back it up.

Royal Fruits is a simple and elegant game with only a total of eight symbols. Six of those are regular symbols and the other two are a wild and a scatter.

The symbols are the traditional fruits. They are divided into three groups and each of them have identical prizes.

The first special symbol is the star wild. It will substitute other symbols and has a decent win on its own. There are wilds on every reel, so you can get a complete payline with nothing but wilds.

The crown is the big-ticket symbol in this game. They are scatters and have a high win potential. You need at least nine to get a win, which isn’t easy. But on the other hand, getting the reels full of them is worth an insane amount. Hitting the jackpot is 120,000 coins.

Getting a decent win in this game doesn’t require you to first activate some special feature and then get the correct combinations. All you need to do is to watch over your bankroll and adjust your wager accordingly. The game has low volatility and high RTP, so everything is decently balanced.

This is one of those ‘what you see is what you get’ slots. Everything is all laid out in the base game and there are no special features. Even the scatter symbols are there just for their wins and nothing more.

This game will immediately divide the players into two groups. Some can’t understand why anyone would want to play a simple game like this and the others will just enjoy the simplicity. If you are still reading the review, then my guess is that you lean towards the latter group.

What makes this game stand out is the high RTP and low volatility. The game is somewhat predictable, but that is just part of its charm. These games are great when you need to fill a wagering requirement because you can pretty much just keep on playing for a good while.

Personally, I'm a bit on the fence with games like these. Normally, I don’t really play these games, but I don’t dislike them. On a rare occasion, I will get that urge to just sit down, turn my brain off and play these simple games just because they are so plain.

Browse casinos with Royal Fruits 40 and other slots from NetGame Entertainment . Create an account and try the game for free before making a deposit.

You can play Royal Fruits 40 in English, German, French, Spanish and 6 other languages. 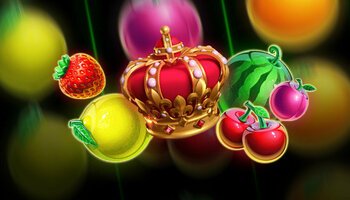