Royal Wins puts us in London, enjoying the miserable weather and the many sights of the big city. While exploring this place we might even stumble into some big wins!

This slot is made by Booming Games and was released in 2017. It’s easy to tell since it looks strikingly similar to other games made by this developer, including Asia Wins and Miami Nights. That means neon-sign symbols that you might find hanging above a pub, designed to fit the theme of the place it’s based on.

The symbols are all original which I always appreciate. The background is pitch-black which helps the neon symbols stand out but doesn’t add to the setting at all. Luckily the symbols look great even though they are simple. With a 5-reel, 3-row playing field and 20 paylines there is enough room for each symbol to show itself off.

They are slightly animated when part of a winning payline, flashing and showing which payline they were a part of. It also includes the total coin value of the betline, especially convenient when there are multiple paylines winning at the same time.

The music was very amusing, playing The Liberty Bell March by John Philip Sousa. This might not tell you anything unless I tell you it was also used as the intro music for Monthy Python’s Flying Circus. Maybe one of the most British things ever! Unfortunately, any winning payline interrupts the pleasant song with a rather jarring jingle, which I feel they could have toned down or tried to be fit in a bit better. Luckily it’s also possible to switch off either the music or the sound effects so you can choose to leave the music on while turning off the effects.

The symbols for Royal Wins were created from the ground up and are thus all unique. They were made specifically to fit the theme and do a good job at it, depicting iconic elements or sights that we associate with London. They are all looking brightly coloured to keep them differentiated. The only symbols I’ve seen before are the 7s but they were given their own colour schemes to still fit in with the theme.

The features in Royal Wins are the same as the ones found in most Booming Games slots. That’s not a bad thing since the features generally work well but it does make it rather predictable as well as difficult to differentiate the slots, especially with the similar neon look.

If you’re at all familiar with Booming Games’ selection of games these features should be absolutely no surprise to you. They are also almost the most basic version that I’ve seen, meaning no hidden extras or special functions.

Where in Wunderfest Deluxe, for example, the Stacked Symbols count as their own vertical payline, you won’t find that in Royal Wins. They might help in getting a win just like any other reel filled with random symbols, meaning they don’t statistically help in getting any wins.

The Free Spins mode does offer re-spins which is a slight deviation from the norm, which means that getting 3 or more Scatter Symbols during the Free Spins mode adds an additional 10 free spins to the game. Then again, since there are no special features that activate during this mode, there is no higher probability you’ll get a win over the base game.

All in all, I find the features that Booming Games includes in their slots to be rather average. There is a good reason they pick them because they’re familiar and popular. That said, they do very little to shake up the basic gameplay which means that if you played one you played them all.

Just like the other slots by Booming Games, Royal Wins offers an enjoyable if forgettable game experience to classic slot enthusiasts. The game has a standard selection of features, a standard playing field and rather unimpressive coin values for wins.

Choose a bet between £0.01 and £200 per spin that makes you uncomfortable, keeping into account the low volatility. A max. win of 2,000x your bet is actually rather impressive for a slot like this but I never felt I got close to that type of win.

The original symbols and the fun soundtrack helped a little in setting the game apart but because in the end, it’s about the gameplay for me, I don’t think I will remember this game a few months down the line. I hope Booming Games doesn’t attach itself to this format too strictly or it could start to work to their detriment.

Browse casinos with Royal Wins and other slots from Booming Games. Create an account and try the game for free before making a deposit.

You can play Royal Wins in English, Finnish, Swedish, German and 23 other languages. 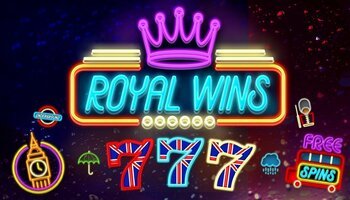