Sabaton is the Play ‘n GO slot that celebrates the famous Swedish heavy metal band with the same name, giving them their own game which brings together their music and imagery with wilds, colossal symbols and free spins.

This slot was made to give players the opportunity to play a high-octane slot while enjoying the loud music of Sabaton. Even those people that don’t enjoy this type of music might get something out of the game as it is also a competent video slot. It has a standard 5-reel, 3-row playing field with a low 10 paylines.

As the game came out in 2019 the graphics are still sharp and detailed, with drawings of the different band members as well as various icons they use in their songs. For people who are unfamiliar with Sabaton, many of their songs detail heroic battles in history without concern for politics. The songs range from ancient times all the way to World War 2 and beyond.

When it comes to the music, this is obviously based heavily on their song library. During the base game, the song Bismarck plays. The sound effects that trigger whenever there’s a win or a special feature fit the heavy beat of the song. We can also hear the audience chant when a colossal symbol appears on the screen.

Sabaton features a number of symbols. The high-paying symbols are the different band members which can all appear as colossal symbols. Low-paying symbols consist of items related to their songs, ranging from swords and Spartan helmets to hand grenades. Keeping all of the symbols original and related to the theme really helped. In the background, we can see some strange war machine that might be a battleship but it could also be something more fantastical.

The symbols in the game come with the following payouts:

The low payouts for all but the Wilds will mean that getting big wins is harder unless the features help out. The wins themselves were also spread out quite a lot. All this works together to create High Volatility when playing the game and players should be careful not to bet too high when they start playing.

The game does allow players to pick a bet between £0.10 and £100 per spin. The max. win of 5,000x your bet is a nice jackpot but not outside the norm for games with similar volatility. Still, it can be a good incentive for players to keep going.

Sabaton doesn’t include too many features but the ones that are added are reasonably frequent. Even during the base game, the right Colossal Symbol can offer some bigger wins, although I didn’t find this to be very common.

To start with, a quick look at the features themselves:

Although none of the features are especially original I did think they offered some interesting possibilities. The Colossal Symbols appear quite frequently during the base game and appear every spin during the free spins mode. Any symbol can become colossal with the Wild obviously being the best one. Their position is not guaranteed during the base game though, which can mean a symbol appears on reels 3, 4 and 5 which won’t help create a win.

The free spins mode might sound rather hard to activate but the Scatter symbol can also become Colossal whenever there are between 3 and 8 on the screen, instantly turning it into 9 symbols. Activating the Free Spins mode was rather lucrative in my experience but in no way a guarantee for major wins.

Instead, I would argue that the free spins mode is likely to boost your funds a little bit back to what it used to be without it getting high enough to really count as a big win. This will require the Colossal Symbols to do their job several times in a row, preferably with the Wild symbol.

Sabaton is a great slot for people who enjoy the heavy metal songs by this famous band. People who aren’t familiar with their music can give it a try through playing this game, even though it only gives a limited sense of their discography of course. The graphics are also fitting to their band members and the general vibe of the band.

Even if you aren’t quite as enamoured by the slot’s music, it does offer a mute button so you shouldn’t let that dissuade you from giving it a try. Players might find the mix of features and the excellent presentation enough to keep them interested for quite some time.

Browse casinos with Sabaton and other slots from Play'n GO. Create an account and try the game for free before making a deposit.

You can play Sabaton in English, Finnish, Swedish, German and 30 other languages. 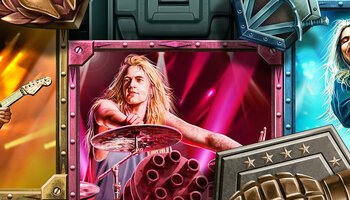