Safari has us take the long trip to Africa where we get to spot a large number of amazing creatures that roam the continent, as well as trying to bring back some treasures. This slot features Free Spins and Wilds to keep us occupied!

Created by Endorphina and released back in 2014, this slot is one of the older games in their library. That doesn’t mean the game has become dated, however, as the graphics still look sharp as ever and the animations bring the 5-reel, 4-row playing field to life. With an impressive 50 paylines, the game also offers a steady trickle of wins resulting in a Medium Volatility.

The game has a simple background that shows us some of the iconic trees growing on African plains to put us in the mood. Most of the theme is shown to us through the different symbols which involve different animals as well as the tools needed to go on a safari. Whenever there’s a win the symbols involved show a slight animation which I thought was a nice addition.

When it comes to the sound, Endorphina seems to have put some more effort into it than their other slots. The special bonus game especially has some nice sounds, including a fitting song and appropriate sound-effects when there’s a win. It’s not terribly original but I appreciate they put in the time to add these sounds.

Safari has a nice collection of symbols, all of which are original for the slot. The high-paying symbols are different animals that are found on Safari while the low-paying symbols include different accessories you could take with you. I think the game also has a vibe that shows it taking place in the early days of the 20th century, considering the old-school camera and the classical binoculars. In that regard, it draws inspiration from adventures movies.

With a rather large number of different symbols, compensated by the Wilds showing up regularly, the game lands on Medium Volatility. If you’re someone who enjoys a steady game that sometimes grants a bigger win but isn’t completely devoid of wins in the meantime, you’ll probably enjoy Safari’s middle-ground.

As with most Endorphina slots, Safari doesn’t use too many features. The ones that are there are simple and effective but entirely unoriginal. Still, don’t fix what isn’t broken.

I found both features to activate often enough to be noticeable, with the Wilds obviously being more frequent than the Free Spins. Still, the Wilds would often grant wins. Something to mention is that the 3 highest-paying symbols, the Lion, Elephant and Water Buffalo, already grant a win with only two-of-a-kind on a payline. It’s not much but I thought it was nice that they added it.

Once the game puts 3 Scatter Symbols on the screen the Free Spins mode activates. This first shows a brief animation of the player leafing through what looks to be a diary before starting the mode. The background is changed to show a night sky as we stalk through the dry grass, looking for the animals.

The Free Spins mode plays exactly the same as the regular game. Unlike other Endorphina slots like The Vampires and Undine’s Deep, the free spins mode offers no multipliers to its wins. I thought that was unfortunate. Players receive 10 Free Spins to play with, although it is possible to win more if they manage to get Scatter Symbols on the screen again.

While I was playing Safari I had the Free Spins mode trigger a couple of times. In my experience, it doesn’t grant any massive wins but it is a nice increase in your funds. All in all, my coins stayed relatively stable during my time playing with only a slow decline. Players that are feeling more or less confident can pick a bet between £0.50 and £500 per spin. Considering the volatility, I would warn against betting too high as it can drop down very quickly.

Safari offers players a very rudimentary experience. I would almost call it the standard video slot that is found online now. There are Wilds and Free Spins, some animations to liven up the reels, a nicely drawn but obscured background and a passable soundtrack.

People who are just looking for a slot that does the bare minimum will find it in Safari. If you want to experience something new or exciting, I don’t think you’ll find it here. This slot is in every sense of the word ‘fine’. It does what it does well enough without actually offering any longevity. You’ll likely forget about it once you close the tab.

The last thing to note is the max. win of 1,000x your bet. It’s not as high as some of the other Endorphina slots offer, but it’s more than a lot of slots by rival developers pay. It might be something to consider when deciding if this game is worth your time.

Browse casinos with Safari and other slots from Endorphina. Create an account and try the game for free before making a deposit.

You can play Safari in English 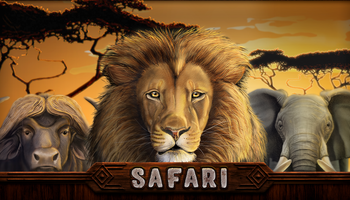