Sakura Dragon takes place in the countryside of ancient Japan where a mix of intrigue and mysticism create an enchanting slot, with the prospect of seizing sizeable wins.

The game was created by Playson and released in 2019. The beautiful drawings really make it obvious that it is a new game while the different features keep the experience simple. I found this to be a common occurrence among Playson slots, where they combine new visuals and design innovations with a more classic play experience.

Sakura Dragon is set in Japan and everything about the game was designed with this in mind. The symbols are all done in a Japanese style or have Japanese characters on them. The lower-paying card symbols are unfortunately not as creative but still do their best to resemble original Japanese writing.

The music follows the same theme, with a subtle atmospheric sound playing in the background. Different events in the game trigger small sounds, from getting a Bonus Symbol or getting a big win. It all stays calm and easy though, which I liked.

The game is built with a 5-reel, 3-row playing field and 15 paylines. Sometimes a special feature is activated which adds several Wilds to the playing field by way of a ghostly dragon. I found this to be perhaps the most striking and beautiful aspect of the game. Meanwhile, the background shows us a traditional Japanese mountain range with a setting sun behind it.

The payouts per win were pretty high compared to other games but considering the High Volatility that also made sense. I didn’t get a lot of wins but when I did they were often quite high. The biggest factor for that were usually randomly added Wilds.

Talking about randomly added Wilds, Sakura Dragon has a few features worth mentioning. Although there aren’t a lot of features, I found them to add enough to the game to give them merit to exist. All in all the game sticks close to the classic slot experience, however.

As you can see, there aren’t a lot of features and the ones that are here will be familiar to even the most casual players. The random wilds were maybe the most interesting aspect of the game. On the one hand, they deliver easily the biggest wins by adding up to 10 or more Wilds to the playing field. On the other hand, they are also the most beautiful part of the slot, with the ghostly dragons snaking their way across the playing field as they deposit lotus flowers that turn into Wilds.

The Free Spins mode was rather unremarkable. I felt like there was no special benefit to getting this mode although it might be possible the Random Wilds showed up more commonly. It was hard to tell for sure however as they can also appear during the base game.

Either way, getting a win was often a big win because of these Wilds and the high payout for winning paylines. Due to the high volatility, I would suggest players tread carefully. I usually start off with betting low amounts to get a feel for the slot and only increase once I have a grasp on how likely and how big wins are.

Playson delivered another excellent classic slot with Sakura Dragon. The game incorporates beautiful images and a suitably dreamlike soundtrack with pretty standard game experience. The developer continues to appeal to players that enjoy something visually pleasing without altering the gameplay too much.

The few features it did include are subtle and not overbearing but offering the player an opportunity at getting a few big wins. It’s always nice to see your patience be rewarded and getting the Free Spins mode was definitely worth it because of the Random Wilds.

Like I said before, try the slot out first with a few lower bets before you think about increasing them. The High Volatility meant that wins were spaced out quite a lot and it was always a choice between getting bigger numbers and running out of funds. Players can choose a bet anywhere between £0.20 and £100 per spin to make that easier. If the stars align, some players might walk away with the max. win of 750x the bet.

Browse casinos with Sakura Dragon and other slots from Playson. Create an account and try the game for free before making a deposit.

You can play Sakura Dragon in English, Finnish, Swedish, German and 18 other languages. 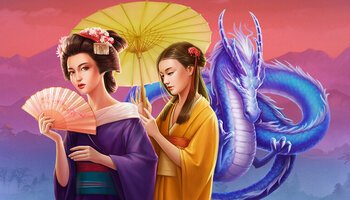