Sakura Fortune brings players to a beautiful Japanese garden where they are introduced to a series of characters in stunning detail. The slot further features Stacked Wilds, Free Spins and a special re-spins mechanic.

This slot was released in 2017 after being developed by Quickspin who created this 5-reel, 4-row playing field as part of a series of Sakura slots. The game has some excellent graphics, including a Stacked Wild with animations. There are no card letters or card suits in the game that ruin the illusion, instead offering players a fully immersive experience. The game also has some excellent graphics when there’s a win, causing blossoms to swirl around the symbol.

The game has 40 paylines which is quite high for a regular slot but evens out when considering the larger playing field. Players will have to deal with High Volatility as they keep playing, the slot only offering wins occasionally but those are a little bigger than just a single win.

The symbols in Sakura Fortune are all made original for the slot even though not all of them are terribly creative. The Asian setting is obviously very popular for a lot of developers which means creativity isn’t exactly forthcoming. That said, the art looks great and the fact that all symbols are original means it deserves some extra credit. No poorly integrated card letters but different coloured coins to act as the low-paying symbols.

Meanwhile, the characters that act as high-paying symbols are drawn really well and also come with some subtle animations. The only exception being the Stacked Wild that will show off some more expressive animations when part of a win.

The payouts for every win is low, with even the biggest possible standard win only paying 10x your bet. This is mostly because of the higher possibility of getting multiple wins at the same time, the re-spins feature, and the ease at which the free spins mode can be activated. Players can mitigate the risk somewhat by picking a bet between £0.20 and £100 per spin that they’re most comfortable with.

Sakura Fortune has a number of basic features that make the gameplay more interesting but aren’t particularly interesting or rare. Players that have some experience with slots will have no doubt become familiar with each of them in one or more other slots.

The feature in the game include:

The Stacked Wilds show Sakura in all her glory, becoming animated whenever she’s part of a win. The Stacked Wilds play a big part in the game and they often appear, although they don’t always fit the reel perfectly. When that happens it can be nudged to fit the reel anyway, but this is not guaranteed.

Whenever at least two Stacked Wilds appear on the screen they become stuck in place and the re-spins feature is triggered. Players receive 1 re-spin for every Stacked Wild on the screen. If an additional Wild appears on the screen this grants the player an extra re-spin. I found this feature to activate relatively often but not particularly more often than the free spins mode.

The Free Spins mode is triggered the same way as it is in most games, whenever 3 or more Scatter Symbols appear on the screen. Activating the free spins mode grants the player 7 free spins. This game mode plays much the same as the base game, except that Stacked Wilds will always become sticky during this mode.

I found this to be the most volatile part of the game. If the player manages to get 2 or more Stacked Wilds on the screen wins are likely to increase quickly, but this is not guaranteed.

Sakura Fortune is a great looking slot that makes a lot of creative use of the setting even though it has been overused. The characters are drawn really well and the Stacked Wild even gets some special animations. All of the symbols are also unique, which helps establish the theme very well.

The features are not very original but they do their job well and help the player a lot. I found my funds to stay relatively stable during my time playing and occasionally spiked up. It’s up to every individual player if they want to stay in the game at that point or cash out.

The max. win in this slot is 1,023x your bet which isn’t as big as some other slots but I did feel like it was possible for a player to randomly stumble on it. The Stacked Wilds and Free Spins features are present enough to really feel like they were part of the game.

Browse casinos with Sakura Fortune and other slots from Quickspin. Create an account and try the game for free before making a deposit.

You can play Sakura Fortune in English, Finnish, Swedish, German and 23 other languages. 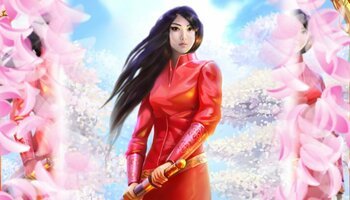