Tension is building up in Santa’s workshop. Rudolf stole Santa’s hat and won’t give it back. Can you settle the score?

NetEnt released Santa vs Rudolf, a funny Christmas slot, in 2019. It is a surprising game, for it is a proper slot with multiple features. Most holiday-themed games are too simple to be interesting, but not this one. Here you get special wilds, free spins and two separate bonus games in one festive package.

Check out this five-reel slot with 20 paylines and see who gets to keep the hat in the end. Will Santa’s ride be a cold one, or will the hat sit proudly on his head?

If you like how this game plays, but are not in the mood for a Christmas-themed game, NetEnt got you covered. The Invisible Man is a dark and moody slot that is mechanically almost identical to Santa vs Rudolf. It is based on the Universal classic film of the same name.

It is a beautiful day in the deep north and the sky is bright and pink. The trees are covered with snow and the air is cold and crisp. It is like a scene from some Christmas special and I wouldn’t be surprised if this idea would someday be turned into a cartoon. All the pieces are there, you just need to animate it.

The game looks and sounds good. NetEnt did a great job setting the theme and conveying the mood. You can quickly read what the characters are thinking and how this is all going to go down. I enjoy playing this game, both because of the mechanics and the visuals.

I do have to give a special shout-out to the background music. You know that a Christmas-themed anything is a keyword for horrible jingles that get stuck in your head. That’s not the case in Santa vs Rudolf. Here the music is full of adventure and magic, and you actually could listen to it for a long time without getting annoyed.

What is the first thing you think of when asked about Christmas; candy canes, gifts or maybe reindeer? All of those can be found on the reels of Santa vs Rudolf.

The five low-paying symbols are card symbols done in candy canes. The five high-paying ones are all related to Santa himself. You got letters to Santa, a sack full of gifts, jingle bells and even Santa’s sleigh.

This game’s most important symbols are the two wilds, Santa and Rudolf. Both are walking wilds, which appear only on one reel. One of them walks from left to right and the other from right to left. They are similar to the walking wilds of Jack and the Beanstalk, but these can go in different directions.

If the wilds ever collide, that is when the showdown begins. First you get a bunch of free spins and then you might even activate one of the bonus games.

If you look at the paytable, you might get a little scared. The wins look like they are incredibly small, even if you get four or five of the same symbol. That is not a problem though, when you look at how the walking wilds work. For a single wager, you can get five or even more re-spins, which means multiple attempts to win.

I have had those moments when I just couldn’t get a single wild. Those are a part of the risk and will frustrate anyone. Then there are those times, when my 10 free spins actually turned into 70 spins, because I just kept getting more and more wilds.

Wilds in this game are active. As soon as you get one on the reels, it starts to walk to the other end. For each step they take, you get a free re-spin. The re-spins continue until there are no more wilds on the reels.

As Santa walks to the left and Rudolf to the right, they can collide. If this happens, you activate the Free Spin feature and only one may walk away with Santa’s hat.

When the wilds collide, you get 10 free spins. At the top of the screen, you can see two meters filling up. Every wild symbol that walks out will increase that character’s meter by one, and whichever fills up first, is the bonus game you win. Free spins will follow the same rules with the walking wilds. You will get re-spins for as long as there are visible wilds.

If Santa’s wilds win the Free Spin feature, you will help him find the hat Rudolf hid. Rummage through gift boxes, baubles and stockings to find the missing hat.

You get to play three rounds and each has five options to choose from. Check the items and you can find a cash present, a bonus multiplier or Santa’s hat. If you find the hat, that round stops immediately.

If Rudolf wins the Free Spin feature, he will keep the hat and the rest of the reindeer will all join in for some fun. You get three extra free spins, but these are not your regular spins. The reindeer will jump on the reels and you get five extra wilds at the beginning of each spin.

Santa vs Rudolf has done something that no other seasonal slot has. It is a game that I will play even outside that holiday season.

This and The Invisible Man are both some of my favourite games. Which one I choose depends on my mood, but both get played all year round.

What I like about these games is that I feel like I get some bang for my buck. The walking wilds that have the potential to go on and on and the free spins that can jump right to the bonus game are great features. Add a delightful Christmas-theme on top of that and you got yourself a wonderful game.

Play Santa vs Rudolf for free

Browse casinos with Santa vs Rudolf and other slots from NetEnt. Create an account and try the game for free before making a deposit.

You can play Santa vs Rudolf in English, Finnish, Swedish, German and 20 other languages. 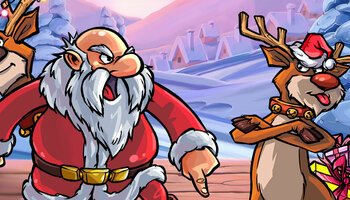