Scruffy Duck puts us on the bank of a pond, watching a family of ducks splash around. I love the original ideas Netent comes up with for their slots so let me introduce you!

This slot was released in 2017, consisting of 5 reels and 25-paylines, and is based on the fairytale of the ugly duckling.

Each of the ducks is well-designed with their own distinct look. The rest of the slot builds on the idea of watching them from the edge of the pond with little details to enforce this. For example, you can see a dragonfly flying from reed to reed.

Although I mentioned the ugly duckling at the start, it’s a blink-and-you’ll-miss-it detail. The only hint that Scruffy Duck is based on that story is that the Wild looks like a nerdy duck that can randomly grow into an Expanding Wild in the shape of a swan. Once I noticed how the ugly duckling changed into a swan it clicked for me, but I couldn’t find any other details that built on that idea. I thought that was strange.

It’s important to note this did not take away from my enjoyment of the slot, but knowing the attention to detail that Netent usually gives its slots it seemed odd that they would put so little thought in the concept.

Luckily the soundtrack does compliment the game well, with a whimsical tune and several smaller sound effects that gave me the illusion of a lazy summer day at the pond.

Obviously with a game about a duck family you can expect the symbols to bring that theme to life. In Scruffy Duck the symbols are, from highest to lowest:

Each of the symbols is beautifully drawn and very easy to tell apart. Unfortunately, when any of the ducks are on a winning payline they don’t get their own little animation like it often happens in other slots, which could have been a way to inject a little more personality into each of them.

One slot that comes to mind is Yggdrasil’s Vikings Go To Hell, giving each of the Vikings a distinct look as well as their own cool battle animation. That type of detail gets me very invested in a game and I think Scruffy Duck could have benefited from it as well.

It wouldn’t be a Netent game if Scruffy Duck wasn’t filled with features. Although they have a tendency to go overboard with them, in this case, I think Netent paced it perfectly. During the base game you only have two features to keep in mind:

Once you get to the Free Spins phase you first have to choose a modifier. You do this blindly by picking 1 of 5 ducks who are fishing a modifier out of the pond. Once you made your choice it shows you what you get:

These modifiers are only active during the Free Spins phase. As is probably obvious, the best one to get is the Double Feature. I managed to choose it once, giving me both an x3 Multiplier and the Colossal Wilds! Since choosing the modifier is random, you can’t expect to pick it every time.

I thought Scruffy Duck was a solid albeit pretty unremarkable slot when compared to other Netent slots. You really can’t go wrong when playing something made by this veteran developer and Scruffy Duck is no exception. At the same time, the game did not feel very memorable either.

The idea of basing it on the ugly duckling story was nice but it seemed as if Netent didn’t really have any creative solutions on how to implement it in the game. Eventually, it was something that made me chuckle when I noticed it before promptly forgetting all about it.

With a Medium Volatility, the game offers a steady but paced out number of wins, giving me that cadence of not getting much for a while before suddenly winning a nice amount. Bets go from £0.25 to £250. Depending on what you’re comfortable playing with I’d suggest using a lower amount per spin since there can be quite some time between wins.

The highlight of the slot was the Free Spins phase. Choosing a modifier and hoping for a good pick was exciting and a nice way to prepare me for the Free Spins. Seeing how each modifier changed the results was also a lot of fun.

All in all, Scruffy Duck ends up in that strange place where I think it is a good, fun slot that is also overshadowed by other games. Maybe if they had really emphasised the ugly duckling facet it would have had more staying power but as it stands it’s a nice game about a random duck family.

Browse casinos with Scruffy Duck and other slots from NetEnt. Create an account and try the game for free before making a deposit.

You can play Scruffy Duck in English, Finnish, Swedish, German and 20 other languages. 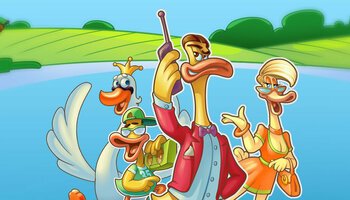