Scudamore’s Super Stakes brings two popular games of chance together: slots and horse racing. As a novice in the world of horse racing, it was interesting for me to see how Netent combined the two!

I will admit it up front, I am unfamiliar with horse racing. Any more than the basic concept of the sport has eluded me and with my attention towards online slots, I never had the time to really dive into it either.

Scudamore’s Super Stakes seems intent to change that. Developed by Netent and released in 2019, the game is set in the exciting world of this ancient sport. As with most Netent games it overflows with options and features. Luckily it keeps the base game on a familiar 5 reels, 3 rows playfield with 20 paylines.

As far as the graphics go, the slot looks good but does not do anything spectacular either. I expect a game that was released in 2019 to have crisp, sharp images so it doesn’t really earn points by doing that. Special mention, however, goes to the bonus game which involves an actual horse race. Here you’re treated to 3D models of 4 horses and their jockeys competing on a track. I thought this was when the game most closely combined the elements of slots and horse racing.

The music goes beyond what you normally hear in a video slot and I will actually call it a soundtrack as it is more than a simple repeating jingle. No, here we are treated with a rousing song that picks up steam as the game plays. I would almost use the word bombastic but I don’t want to make it sound like it’s overbearing. Instead, I found it to perfectly fit the theme and setting of the slot.

Scudamore’s Super Stakes adds more elements to the idea of being at a race track through the announcer. You’ll hear him when you fill out a Bet Slip or when the Bonus Game plays. I thought it was a simple, effective way to set the mood.

This slot is set at a race track so logically the symbols are made to reflect that. They’re not terribly inspired but they are easily recognisable. From highest to lowest they are:

If you get a win the symbols on the payline glow but there are no additional animations, making it all appear pretty static.

As I’ve come to expect from Netent slots, there is an abundance of features to go over. During the base game, these are the ones to keep in mind:

I think most of these features speak for themselves except for the Bet Slip. For me, this is something typically associated with horse racing so it makes sense Netent added it to the game.

At any point during the base game, you can open the Bet Slip portion and choose a symbol you want to place a bet on. Next, you can choose the details of the bet like the symbol appearing 11 times in 10 spins. Finally, you decide how much you want to bet which influences the potential win.

You can choose to bet between £0.10 and £100 per spin, but I’d suggest a lower bet and a Bet Slip on the side. If you have a Bet Slip active it will count any time that symbol appears on the screen, regardless if it’s part of any win. If you manage to hit the number of symbols within the allocated number of spins, you get the payout.

As I was playing, the game already started to dazzle me with the number of features it presented. Even though the Bet Slip feature is fairly self-explanatory it’s another layer of betting on top of the standard slot experience.

That’s why the bonus game felt like a hefty dessert after a full meal. Very nice but perhaps too much!

The bonus game is called Peter’s Classic Cup and activates when you get three Scatter Symbols on screen at the same time. First, we pick one of the riders we want to bet on, each of which has bigger or smaller odds at winning, and an associated multiplier. Next, the race begins. A playing field of 4 rows and 5 reels appears which spins indefinitely until any of the four horses has 4 wins, winning the race.

I found the bonus game a lot of fun, very well-made but also very rare to pop up and when it finally showed up, it would end quickly. Couple that with the fact the slot already has a lot of features and it almost felt unnecessary.

Scudamore’s Super Stakes is a slot that overflows with things to do. All the different features make sense and add to the idea of being at a horse track, but it also becomes overwhelming.

I guess in the end it’s a good thing that the Bonus Game is rare because it keeps it from getting too ridiculous. At the same time, it was the most fun and best-made part of the game which makes it quite disappointing it appears so infrequently.

If anything I wish they would have removed the Bet Slips and made the Bonus Game a bigger part of the game, but as it stands the game is probably mostly aimed at people that enjoy both video slots and horse racing and are less likely to get overwhelmed by the number of features.

I think everyone can get something out of this game even if you’re not a fan of horse racing because, in the end, it is still a very solid slot. Just be prepared to put the time in, keeping track of all the different elements.

Browse casinos with Scudamore’s Super Stakes and other slots from NetEnt. Create an account and try the game for free before making a deposit.

You can play Scudamore’s Super Stakes in English, Finnish, Swedish, German and 20 other languages. 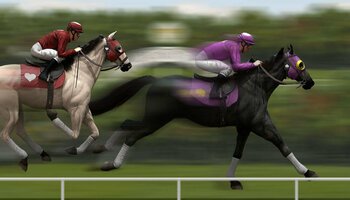