Secret of the Stones slot review

Play Secret of the Stones

Secret of Stones brings the myth of Merlin to life in a classic Netent slot. Released in 2013 this game has been around a long time but it continues to impress me.

I remember being blown away by the graphics when I played Secret of Stones when it was first released. As I played this 5-reel 25-payline slot again for this review, I was pleasantly surprised at how well the graphics hold up.

The Secret of Stones slot is based on the legend of King Arthur, specifically taking the mysterious Merlin as a focal point. This game takes place in a forest where you’re surrounded by stones engraved with different runes. It could very well be that you’re on Avalon, the mythical island associated with Arthurian legend.

If that name sounds familiar, it might be because you’ve played Avalon 1 or 2 from rival developer Microgaming. Although those slots are more obviously aimed at King Arthur, I think Netent’s ambiguous take on the legend works better.

As I said at the beginning, the game still looks great. The art is sharp but also has a great amount of detail to it. The different symbols are based on the time period the game is set in. It reminded me of newer Netent slot Asgardian Stones, which also incorporated runes into its design.

The finishing touch is the soundtrack which adds an extra mythical allure to the slot. It combines elements from harps, flutes and triangles to create a classic sound. When you land on any winning payline, it will play a short victory tune.

Although Netent doesn’t always add completely unique symbols to the games they make, they put in the effort to make sure that even the ‘classic’ symbols like Ace and King have a suiting look that fits the style of the slot. It is no different in Secret of Stones. From highest to lowest they are:

I think this large amount of different symbols is why the slot has a High Volatility. It’s harder to get the same symbols on a winning payline compared to other games.

As always, Netent added a fair share of features to Secret of Stones. Most of these can be found in the Free Spins phase. I’ll start with the features that are present in the base game:

Keeping the base game simple isn’t necessarily bad but because of the high volatility, it also meant I wouldn’t get any wins for a longer period of time. With only two features to look at, the game would often struggle to keep my attention.

You always start with 10 free spins but depending on your picks, this can go up to a maximum of 29.

While I was playing, the Free Spins phase was where I made the biggest wins. Those were sorely needed since I barely got any wins during the base game.

Even though Secret of Stones came out in 2013 it looks amazing even now. The gameplay is solid and there are a bunch of features, most of which are only part of the Free Spins phase to keep it from getting overwhelming.

I’m not a big fan of games with high volatility because it really delays getting any wins and for me, there is often too much time between these to keep me interested. The Secret of Stones slot might be one of the most extreme examples of this. I would almost say that there’s barely any point to play the base game except for getting to the Free Spins phase.

The Free Spins phase is well made, adds a couple of good extra features and often made it worthwhile to stick around for. However you have to be ready to spend a good amount of time to get there. With the ability to choose a bet between £0.25 and £125 you’re able to choose how much you want to invest.

As should be obvious, I liked Secret of Stones but to me, the delay between wins was just a bit too long. If you’re okay with that I can’t imagine you won’t have a good time playing this game. Adding the prospect of a maximum win of 25000x your bet I reckon that’s plenty of motivation for people to give it a try.

Play Secret of the Stones for free

Browse casinos with Secret of the Stones and other slots from NetEnt. Create an account and try the game for free before making a deposit.

You can play Secret of the Stones in English, Finnish, Swedish, German and 20 other languages.

Secret of the Stones supports GBP, EUR, SEK, NOK and 33 other currencies. 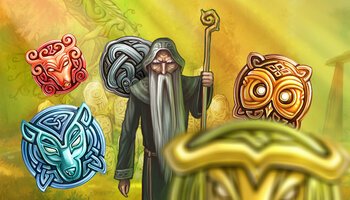