Seven 7s is a Crazy Tooth Studio slot that takes the original fruit machine concept and augments it slightly to create a new type of game. Here you’ll encounter 1 payline on 1 row with 1 winning symbol. Get 7 symbols in a row and that’s a jackpot. Sound simple enough.

This slot was released in 2020 and offers some impressive graphics, even though there isn’t a lot to it in terms of setting or theme. The game seems clearly inspired by those classic fruit machines that were present in bars and casinos back in the day. The playing field is surrounded by extravagant copper and teal patterns, constantly shining and moving.

Meanwhile, the game revolves around a single payline that grows as the game proceeds. The slot only features 3 total symbols, with them having their own purpose. These symbols are big when they appear on the screen and give players a clear view. They are decorated and move when they appear on the reel as well. It’s all rather rudimentary but done in the best way to make it look more entertaining.

To keep the player somewhat engaged the slot plays a whimsical but rather generic song in the background. It has an upbeat tune and a good tempo but doesn’t feel very connected to the classic fruit machine setting the game seems to be aiming for. Instead, it has some nostalgic overtones that reminded me more of the outdoors than an old-school slot.

Seven 7s really doesn’t have a lot of symbols that are used in the game. In fact, there are only 3. The 7 itself is used to calculate wins. The 2x multiplier that will double any wins it’s a part of. Finally, there’s the BAR symbols whose only purpose it is to stop a win. Do keep in mind that although there is only 1 payline, this doesn’t mean symbols always stop perfectly lined up. When a symbol halts half on the reel it also won’t count.

With its unique gameplay, the slot still has High Volatility, not necessarily covering the rate of wins but rather the size. It’s not an impossible task to get a two-of-a-kind win, the problem is getting your spins back through those wins. In my experience, my funds drained slowly over time without big enough wins to get back to the starting point.

To deal with this, the game allows players to pick a bet between £0.20 and £10 per spin. Although this can help in regulating the number of spins you can play, it doesn’t feel like it has a huge impact either. Getting a big win with a bigger bet isn’t as game-changing since £10 is one of the lower maximum bets I’ve seen in slots.

That said, it is important to keep in mind that the game offers a maximum win of 25,000x your bet. With this number, it’s possible that you walk away with a quarter of a million pounds when playing the maximum bet. All you have to do to get this jackpot is to have the 7 symbol on the screen 7 times!

Even though it’s just a tiny list, here is the full overview of different symbols in the game:

It won’t take anyone very long to figure out how this slot is played. There is only 1 reel with 1 payline on the screen at the start. When the reel spins and lands on a 7, that symbol is locked into place and another reel appears. Here too it is spun. If there is another 7 or the Multiplier, these too are locked into place and another reel is added. This continues as long as new 7s appear on the reels.

Since there are really only 3 symbols, you would think there is about a 1 in 3 opportunity to get a 7 on the screen, but this doesn’t take into account that a symbol can only appear halfway on the payline. In that case, it doesn’t count and the next spin is triggered.

In my experience, getting the minimal two-of-a-kind was not that difficult but the payout is only 2x your bet. Getting more 7s rapidly increases this number but is also increasingly less likely. In total, the payouts are:

Seven 7’s is at first glance the most rudimentary version of the classic fruit machine but it actually diverts from its core concept quite a bit. The fact that there is only 1 paying symbol and that reels are added as the game continues are the biggest and most obvious elements of that.

The design was interesting. I didn’t really get a good grasp at what the setting was supposed to be conveying but it looked awesome and felt very appealing. It also helps in establishing that it is based on the classic fruit machine, which fits the overall style.

If you’re looking for something special but based on the classic fruit machine, maybe this game will offer you what you want. Players that prefer classic gameplay will most likely not really relate to this game and might want to skip it.

Browse casinos with Seven 7's and other slots from Crazy Tooth Studio. Create an account and try the game for free before making a deposit.

You can play Seven 7's in English, Finnish, Swedish, German and 26 other languages. 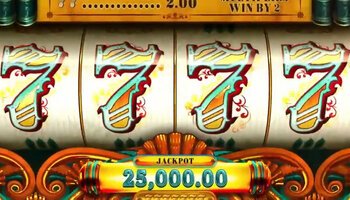