Sevens & Fruits: 20 Lines gives us all the aspects of this slot right in its title. A simple fruit machine with 20 lines based around sevens and fruits.

Developed by Playson and released in 2019, this slot is one of the newest fruit machines that have been released. This is barely noticeable however considering how simple the concept is and how difficult it is to do something original with it. The game has a 5-reel, 3-row playing field with 20 bet lines that run from left to right.

Because of the small size of the game, it has massive symbols that are shown in high detail. Even though they look nice, they’re the same images that the original Sevens & Fruits had. The features included in the game are also a copy which means that the only thing that’s really been changed is the higher number of win lines.

I’m personally not a huge fan of fruit machines. The gameplay is always the same and there is no display of any creativity. It makes for a very predictable time which I recognise is the appeal for many of its fans. I don’t really get a kick out of it, however.

There is very little sound in the game. While spinning the reels all the player can hear is a ticking of each reel as it comes to a halt. Getting a win results in a quick jingle, while the bigger win triggers a piece of a classical concert. Again, nothing new here. The creators took every shortcut they could think of when developing this slot.

With such a limited scope and playing field, there aren’t a lot of different symbols in the game. Taking inspiration from the classic fruit machine there also wasn’t any room for creativity. Even though the symbols look nice and show animated fire when part of a win, they don’t exude any originality. Sevens & Fruits: 20 Lines has a Medium Volatility which translates in occasional wins that usually make back several spins.

The Gold Star functions as a Scatter, meaning that they count towards a win regardless of where they appear on the screen. You do need at least 3 to appear at the same time, however.

Sevens & Fruits: 20 Lines is a very basic slot with barely any features to speak of. The only ones that are worth mentioning are more mechanical options than features:

The game is in many ways just a regular fruit machine, updated to the modern age. Instead of only having a single bet line the game has 20, and because of it uses the entire playing field. If we’re being technical that means it’s not even a fruit machine anymore but a regular video slot.

Nonetheless, the game tries to evoke the same sense of style and setting as the classical games many people are familiar with. The symbols are familiar, the sound is suitably underwhelming and the background is non-existent.

Sevens & Fruits: 20 Lines is a bog-standard fruit machine that brings nothing new to the board except for the extra pay lines. There are other, way more entertaining slots with 20 paylines if that’s what you’re looking for. On the other hand, classic players will be able to find better fruit machines that stay closer to the original style and gameplay of these games that many people love.

The slot looks fine, just as the original Sevens & Fruits did. Brand new Playson slot Diamond Wins: Hold & Win uses the same graphics though and has a fixed jackpot. Older slots like 40 Joker Staxx also uses the exact same graphics. I feel like Playson is depending too much on a small number of symbols and implements them in most games.

What’s there to say about this slot, really? If you’re a fan of the fruit machine look but would rather play with some more bet lines, this is a good compromise. It has practically no features so what you see is what you get. Players that want the original fruit machine experience will not get exactly what they want, while players who enjoy some extra features or modern elements won’t find those here either!

The only things worth mentioning are that you can pick a bet between £0.20 and £100 per spin and that the maximum win is a paltry 273x your bet. Even for people that like to play for the big wins, this game has very little on offer.

Browse casinos with Sevens&Fruits: 20 lines and other slots from Playson. Create an account and try the game for free before making a deposit.

You can play Sevens&Fruits: 20 lines in English, Finnish, Swedish, German and 18 other languages. 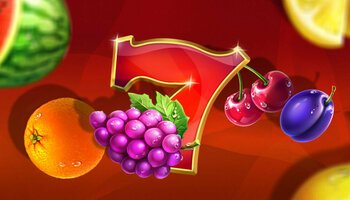