Shaman takes the concept of the ancient tribes living in the rugged wilderness as a source of inspiration for this spiritual game, focusing on the trials of a wise shaman. The slot includes expanding reels, paylines from both sides and colossal symbols.

Developer Endorphina released this game back in 2014 when the studio had just begun production of slots. The graphics have become somewhat dated, mostly because of their low resolution. They do look better on a smaller screen, like a phone, but as I usually play on a desktop computer the graphics looked vague and pixelated. Unfortunate, because the drawings are original and well done!

The theme of the slot is carried through most of the game, with all the symbols originally made. The background doesn’t show much to place us in any particular location, only showing some ribbons hanging off the 5-reel, 3-row playing field. The game has 10 paylines, but with the paylines counting both ways this can essentially be doubled.

When it comes to sound effects, Shaman definitely feels like an old slot. The sound effects it uses are the same ones that are used in many of their other older slots, not fitting the theme at all with its electronic beeps and jingles. There is also no music at all, except with some wins where it plays a sort of dark guitar riff that feels somewhat related to the setting. All in all, the sound design in this slot feels like an afterthought.

Shaman has a decent amount of original symbols that are very distinct from each other. I was reminded of some classic European comics in their style. Even with its High Volatility, the slot only has a small number of different symbols but it still proved difficult to get a win. In my experience, I was pretty reliant on the special features to appear to get any kind of bigger win at all. It also meant my funds dropped pretty quickly as I played.

Even though there aren’t many symbols and the paylines counting both ways, I found it rather tricky to get a win. The special features were really the only way to get any bigger wins, as the base game only offered the occasional single payline. While the five-of-a-kind payouts for the symbols are quite high, the smallest ones barely make back a single spin.

Shaman completely takes place in the base game, without a free spins mode or bonus game to take you out of the drudgery. To compensate for this, the base game does have some special features that augment the gameplay.

The Paylines Both Ways feature is obviously activated at all times and would therefore also be quite common in helping create a win. Even with double the opportunity at getting a win it was still exceedingly rare for me to get a win this way at all. I’m not sure why that is, but normal wins were uncommon, to say the least. Of course, this fits the high volatility.

The special features are the ones that are supposed to give the player bigger wins. The most common one was the normal Wild, which appeared semi-frequently but even then wasn’t always enough to trigger a win.

Because there are so few different symbols it’s only a matter of time before the same one appears to fill an entire reel. Although the game lists this as an Expanding Reels feature I’m not sure if it actually worked that way, and wasn’t just a random occurrence that looked that way. Either way, it could potentially create a big win in combination with Wilds or the Colossal Symbol, but rarely did anything on its own.

Speaking of which, the Colossal Symbol was the rarest feature and I only saw it appear a handful of times. Due to the size of the symbol and the fact it counts as Wilds, it did help a lot in creating bigger wins. Especially when it appeared on reels 2, 3 and 4 since the paylines both ways thus allowed the paylines to be at least four-of-a-kind.

Overall I thought the features in Shaman are good but they don’t really appear enough to make a big impact. As I played for a longer period of time I found my funds to stay relatively stable, only losing a few coins before going back up and averaging out pretty consistently. Unfortunately, this also made it quite boring, only playing to keep my funds at the starting point.

Shaman is a slot that was clearly developed to be played on your phone. The controls are designed with a touchscreen in mind, the graphics become blurry when the screen is too big and the different features also require you to click through multiple screens. When you enable the sound, it even has to download it before playing it.

This meant that playing it on the desktop computer was quite an annoying experience, but I did enjoy it more on my phone. It’s a great game to relax with since the slot requires no additional thought. There is no bonus game and no free spins, you simply spin the reels to see what happens. The special features might have been a bit too rare for my taste but they showed up often enough to keep my funds up.

Players can pick a bet between £0.10 and £100 per spin if they’re feeling adventurous, although I would suggest to start off low and build up over time. The game does require some getting used to when it comes to the frequency of the wins and betting too much too fast might drain your funds.

Browse casinos with Shaman and other slots from Endorphina. Create an account and try the game for free before making a deposit.

You can play Shaman in English 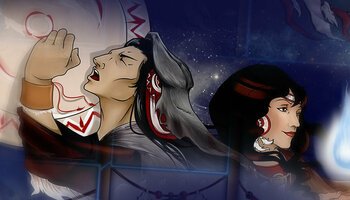