Silverback Gold is set deep in the jungle where animals reign and the gorilla takes the spot at the top of the food chain. Players are treated to an immersive setting with a wide variety of animals, as well as free spins and multiplier wilds.

Developed by NetEnt, this slot was released in 2021 and shows off the current state of the studio. The game doesn’t have quite as many interactive elements anymore. The symbols aren’t as fully animated as they used to be. But the graphics are still crisp and clear, and the symbols are created specifically for the slot.

The background shows us a lush green jungle with the 5-reel, 4-row playing field framed in the centre of the screen. Players can easily see wins on one of the 1,024 paylines as the symbols involved light up while the total coin win is shown. There are several different special symbols I’ll talk about in more detail later.

When it comes to the sound design it isn’t anything especially original. The music we hear closely resembles what we’d expect from a game set in the jungle. That’s not to say the quality is bad. Nor that the music is unoriginal. It is clearly created specifically for this slot. The different sound effects mesh with the song good enough not to feel too jarring.

Silverback Gold makes clever use of the setting to draw inspiration from to fill the reels. The high-paying symbols are different types of animals we could find in and around the jungle. Meanwhile, the low-paying symbols are normal-looking card letters. They are slightly shaped to fit the setting but in general, they look rather lazy.

Players that play this slot will have to be aware that it has High Volatility which means wins are generally difficult to come by. The time between wins is rather large and it often won’t pay out enough to compensate for any losses. The RTP of 96.1% is however a sliver above average, meaning players can expect the occasional big win.

To deal with the volatility you have the opportunity to change your bet to anything between £0.10 and £100 per spin. The size of the bet does not change the likelihood of a win, it only affects the size. While a smaller bet will allow a player to play with their funds for longer, bigger bets are the way to get bigger wins.

Silverback Gold brings the jungle to life in some interesting ways. The silverback clearly gets centre stage as some of the most important features are signified by its presence. On the other hand, some of the symbols have nothing to do with the jungle either.

When talking about the features in the game, they are:

The game itself feels rather simple and players will likely not be very impressed with the general gameplay. The base game only features the Silverback Attack feature that does anything a little special, but it is essentially a Random Symbols feature. This can help with triggering some bigger wins but it is not guaranteed.

It gets more interesting when the free spins mode is activated. Players can activate this manually in some countries but not in others. Before the free spins start, a bonus game opens up. This sees players try to collect as many tokens on the screen as possible. Each token has a value, which is added together to unlock features during the free spins mode.

Silverback Gold gives players a pretty standard gameplay experience with some nice graphics. It's clear NetEnt seems to have changed their priorities away from creating very original and highly detailed slots. Although this game looks very good, there are little animations and it has barely any personality.

The gameplay feels basic but will probably be appealing enough for most slot players. The free spins mode can be a source of some big wins, but it was rather difficult to get into this part of the slot. Once there, the tokens system from the bonus game can change the outcome considerably.

Possibly the biggest draw to the game is the maximum win of 45,000x your bet. This is well above most of its competitors and makes it an appealing slot for both regular players and high rollers.

Browse casinos with Silverback Gold and other slots from NetEnt. Create an account and try the game for free before making a deposit.

You can play Silverback Gold in English, Finnish, Swedish, German and 20 other languages. 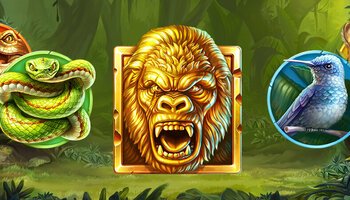