Sin City Nights is a shiny, spunky slot that gives an outstanding tribute to the 'Las Vegas' theme. In the world of online slots, some games that have it all, and I think this is one of those. Slot players are going to find an engaging layout of five reels and 25 paylines and medium volatility.

2,330,000 coins is the maximum win potential - a figure that can be reached from a single spin if you catch the game in the best of its moods. Although this kind of outcome is a statistical probability I still think Sin City Nights is a high payout game.

You don't need any finite numbers etched on the screen to tell you that the cascading wins payout system in combination with win multipliers of up to 15x is a killer combination.

I like how Betsoft's designers have combined two techniques to create a memorable graphic layout. The background represents an entrance of a Vegas casino and the lively showgirl on the right has been drawn in the company's trademark 3D style.

On a whole, the design follows the cascading wins system like a clockwork. It has made Sin City Nights enjoyable for me, so much so that I think this is one of the best 'neon' themed games out there. Another nice touch is the sound design. You can just hear it in the track - this is a jazzy piece played by a live band which I find to be pretty awesome.

The game comes with a standard Wild symbol that can occur only on the three middle reels. It's always nice to know that any cascade can include a wild, which can spur-on an eventual payout frenzy further on. In addition to this, Sin City Nights comes with a good old free spins bonus.

The green and gold neon sign with the word Free Spins needs to land in three positions on an active payline to trigger the bonus. There is one trifle caveat in this regard - the bonus symbol appears on reels one, two and three. On the other hand, a far more pleasing detail is that Sin City Nights adds a 3x win multiplier by default to any winning outcome that crops up during the free spins bonus.

This isn't an extra feature but it does let you double any winning outcome in a heads or tails game. Sometimes I take a random payout for a Double Up on a whim. It's a risk indeed, but doubling my winnings for each good guess has a pretty good feel to it. There is an option to gamble 50% of the winning outcome, so even if you miss you can still hold on to some of the money.

The reason why I like Sin City Nights is because the game can become as exciting as a free spins bonus feature. This is thanks to the 'Explosions' which is Betsoft's way of saying cascading wins. For those who haven't played a game of this kind, each winning outcome is removed from the reel set and the empty positions are filled by new symbols.

The best part about Betsoft's take on the exploding symbols style of play is that each subsequent win triggers a win multiplier. The first drop starts with 1x and accrues 5x your win by the fourth drop during the base game. Subsequent symbol explosions in the free spins bonus are awarded triple, so the four drop pays 15x the win amount.

In view of all the above, the values of the symbols are expectedly lower compared to a standard payline game. The low-paying cards pay as follows:

I think it's a good thing that the values of the high-paying symbols don't rise gradually, but rather abruptly. There is a significant difference between winnings consisting of three of a kind and five of a kind.

I see this as an invitation for the high-payout potential. If there is a single cascade involving five of a kind highs plus a win multiplier, that's a big win right there.

Overall, this is a game that I can recommend to anyone. Unlike older Betsoft games, Sin City Nights plays on mobile like a charm and is generally a feel-good game.

My favourite part is the explosions. Not only are these visually engaging, but can also create neat lump sums in your balance. There is just one smudge on the pretty picture -- the low RTP of 93.66% which is below the average of 96.00%.

Browse casinos with Sin City Nights and other slots from Betsoft. Create an account and try the game for free before making a deposit.

You can play Sin City Nights in English, Finnish, Swedish, German and 22 other languages. 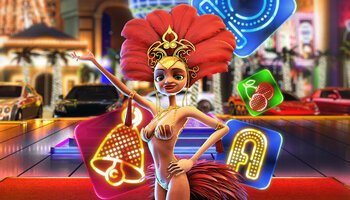