Sinbad brings to life the famous story about the brave sailor that eventually goes on to become a wealthy man that regales his life story to another man called Sinbad. The player gets to enjoy free spins, stacked wilds and amazing graphics as the story unfolds.

Released in 2021 by Quickspin, this slot is one of their newest and aims to show off what the studio is capable of delivering now. It can’t be argued that the slot doesn’t look great, although there might be some missteps along the way. More on that later. The game features a non-standard playing reel with 5 reels, where reels 1 and 5 are 3 rows high and the middle reels are 4 rows high. In total, that brings the game up to 40 paylines.

The reels themselves are filled with different high-paying symbols that are somehow related to the setting if not the story of Sinbad. Given that Sinbad was originally a sailor, I couldn’t help but notice the relative lack of nautical symbols. The Wild has a boat on it, and Sinbad can be identified by the Anchor he’s carrying but other than that it all seems quite disconnected.

Meanwhile, the low-paying symbols are differently coloured gems. Even though this is a rather easy approach at filling up the reels, at least they aren’t poorly done card letters which would make no sense in this setting. The drawings themselves are fine, and the background showing an Arabian city next to the water looks good.

Sinbad is a slot that helps the players get immersed through the use of its symbols and art. The characters all look appropriate for the setting, even though it’s hard to tell who’s who. The background sets the mood as well. I found the animations a bit lacking, with not even the high-paying symbols moving at all when part of a win. The only real animations we can see is the light reflecting off the water in the distance.

The game comes with Medium Volatility as the reels are a non-standard shape which limits the numbers of paylines somewhat. The payouts for wins are low and the different features are quite rare but only have a limited impact on the gameplay. As such, players can expect to win moderate amounts every so often.

If you want to stretch out your time, or you want to go for bigger wins, the opportunity exists as always to increase or decrease the size of your bets. This slot allows you to pick a bet between £0.40 and £80 per spin. As an incentive to keep playing, Quickspin offers a max. win of 748x your bet by hitting the jackpot, but this is pretty paltry compared to other slots with similar volatility.

Sinbad is a rather standard slot in many ways, even though the playing field is slightly altered. The game will not surprise most people that are used to standard slots, while the features only have a limited effect on the gameplay.

As can be seen by glancing at the features, the slot relies very heavily on the free spins mode. The base game doesn’t often include wilds but they are very frequent during the free spins. Unfortunately, it proves to be rather difficult to trigger during my time playing the game. As a result, I saw my funds plummet as the payouts for regular wins are extremely low.

The game is still listed as having medium volatility which I found odd since it so heavily relies on the special feature to activate and creating a single big win during this mode to compensate for a player’s losses. Instead, it seems the game expects the free spins mode to be triggered regularly enough to be considered frequent.

Players that enjoy features that are included in both the base game and the free spins mode won’t enjoy this game, since most of the features are simply absent from the normal gameplay. It will require the free spins mode to experience these features and although they are good at creating wins, that might be too much trouble to be worth it.

Sinbad is a good-looking slot that maybe misses some marks when it comes to the source material. Even though there are some allusions to the adventures that the character is famous for, it weirdly is set mostly in the city that Sinbad lives in during his old age. It would probably make more sense to have it set on a ship.

Either way, the graphics can’t carry the game on its own and I found the gameplay lacking. There are a bunch of interesting features that utilise the Wilds in different ways, but as discussed above these are gated behind the free spins mode. Players that manage to trigger free spins often will be reaping the rewards, but without it, you can expect your funds to do a free fall.

I think the game might be a bit too boring for casual players that just want to get a few spins in since so much of it is hidden behind the free spins feature. Power players might also want to give it a miss, since the max. win of 748x your bet felt insultingly low. That just leaves players who want to experience high volatility gameplay in a medium volatility setting.

Browse casinos with Sinbad and other slots from Quickspin. Create an account and try the game for free before making a deposit.

You can play Sinbad in English, Finnish, Swedish, German and 24 other languages. 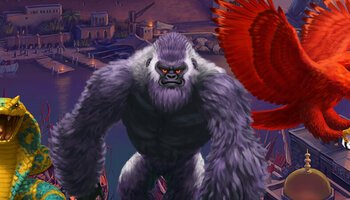