Skulls Up has an interesting take on the pirate life, showing players the sandy beaches and blue seas of the tropical seas while strange and cartoony characters go about their business. Players can further make use of free spins, re-spins and wilds to see how enjoyable this life really is.

The game was developed and released by Quickspin in 2019, making it one of their newer slots and it shows. The graphics are crisp and colourful, with a distinct cartoony style while still keeping it relatively realistic. There is a lot of detail to see in the different characters while the background shows us on a sandy beach overlooking the ocean.

Players spend most of their time looking at the 5-reel, 3-row playing field with 243 paylines. Only during the free spins mode is it possible to expand a part of the playing field and add additional win lines. The Free Spins mode also gives us a different background to look at, having the beach covered in the gloom of night and light coming from the various torches.

When it comes to other details, the game features quite a lot of animations that play both during the free spins mode and the base game. Most of these animations are short and play in the background, like swinging leaves on the palm trees. Other animations include the skull that acts as a wild, laughing maniacally when it’s part of a win.

Skulls Up makes maximum use of the screen while still leaving room for details that set the mood. As a result, the symbols are clear and detailed. The high-paying symbols make up the different characters that relate to the setting while the low-paying symbols are card letters, printed on coins. I thought they made the letters fit the setting as best they could but it still stands out.

The game has a large number of symbols which combines with the paylines and the low payouts to reach High Volatility. Players will likely notice a steady drop in their funds that is only occasionally boosted by activating the free spins or re-spins feature.

Players can try to hit the jackpot, which is a max. win of 3,650x your bet. It’s quite considerable compared to other slots but there are plenty of high volatility slots that award bigger jackpots. In order to make it to the point where the player can hit this win, they can pick a bet between £0.10 and £100, whichever fits their available funds the best.

Skulls Up doesn’t have a large assortment of features but there are enough to change up the basic gameplay and keep things interesting for the player. The features won’t be new to most people but there are some changes made to these popular features that require some extra explanation.

The features you’ll find in this slot include:

The game is focused mostly around the base game as normal, but triggering the re-spin and free spin features isn’t as hard as one might think. I found both of them to be activated rather frequently, allowing players the opportunity to get a big win. At the same time, these features aren’t guaranteed to deliver on any big wins and sometimes you will not walk away with a lot at all.

Both the re-spin and free spins features involve an expanded playing field, where reels 2, 3 and 4 can grow up until they have 6 rows each. Unlocking an extra row is done by getting a Wild or Flaming Skull Wild on that reel. During the free spins mode, unlocking the 6th row will grant 2 extra free spins. This increases the total ways to win to 1,944 paylines if all rows are unlocked.

Skulls Up is an excellent example of what Quickspin can accomplish, with the slot showing off their visual skills as well as providing the player with an engaging and exciting set of features. The music also adds something to the setting even though it’s not quite as original as it could have been.

Players that are most comfortable playing standard fruit machines will probably find the features a bit overwhelming and distract from the basic gameplay too much, but most regular players won’t find this a problem. I thought the features were well explained and clear as the game played, so consulting the paytable shouldn’t be necessary.

In my opinion, Skulls Up is a nice addition to the pirate slot library and offers enough change in terms of gameplay to deserve its place. Depending on your personal preferences when it comes to slots, I imagine most people will have a good time with this game.

Play Skulls Up for free

Browse casinos with Skulls Up and other slots from Quickspin. Create an account and try the game for free before making a deposit.

You can play Skulls Up in English, Finnish, Swedish, German and 16 other languages. 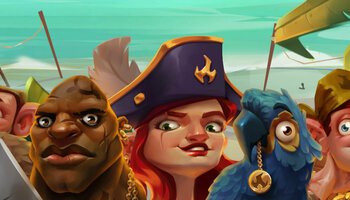