Slot Vegas MegaQuads is a game that uses not 1 but 4 different playing fields, sometimes working together and sometimes not as they spin. Encounter bonus games, free spins and the non-standard reels mechanic as the reels spin.

This slot features 4 separate 4-reel, 4-row playing fields that are grouped together in a square shape. Each of the reels spins on its own but they do share some common features. All of this is set in the Las Vegas setting, with the famous Strip in the background. The game was developed by Big Time Gaming and released in 2020, which might give some regulars an idea of the appearance of the game.

Unfortunately, there aren’t a lot of animations to be seen. Wins on one of the 256 paylines will light up a bit and the tiles grow for a second to indicate which ones were part of a win. Then the game goes back to spinning the reels. The colours used were rather excessive in my eyes but it all does look suitably distinctive. Players won’t get confused about the different symbols. This helps since there are obviously 4 times as many symbols to keep track of.

When it comes to the music, I’m afraid there’s little to add. When the reels aren’t spinning we can hear the murmur of a crowd in the background. Once the game starts we’re treated with a rather silly-sounding banjo song. This music loops and fits the speed of the spins but I didn’t get the idea this was really based on Vegas.

Slot Vegas MegaQuads has a rather unique approach when it comes to the slot’s features but it does not extend this creativity to the symbols. Players can expect a very standard affair with a selection of fruit machine symbols and regular card letters to fill out the reels. All of these are presented in the infamous shining texture that BTG seems so fond of. It doesn’t really connect with me personally, but it does make things easy to understand.

Meanwhile, the gameplay is based around these 4 playing fields and even though there can be up to 16,777,216 paylines at their maximum size, it still comes with High Volatility. Players should be prepared for wins to be rather spread out. When you do get a win during the base game, it’s likely that it won’t pay back a single spin. To balance this out, there are some features that will grant big wins and keep your funds relatively stable.

In my experience, I would lose coins for quite a few spins, then trigger a special feature or a regular big win and make back most of what I had lost. This doesn’t mean you will always end up in the positives, but you will lose your funds slowly. If you want to change that a bit, you can always pick a different bet between £0.20 and £20 per spin.

Slot Vegas MegaQuads obviously has one very distinct feature, the 4 playing fields that largely operate as independent parts. They do interact in some ways though, which is where the other features come into play.

While during most of the game the 4 playing fields operate independently, they do work together when it comes to triggering the free spins mode. Other wins are calculated separately. If the game has a Rainbow Wild on the screen, it will merge either the top or bottom reels together to create 2 separate 8-row, 4-row playing fields.

During the free spins mode, it will merge the vertical reels together to create 2 4-row, 8-reel playing fields. If during this time a Rainbow Wild appears on the screen, all the reels get merged into one giant 8-reel, 8-row playing field with more than 16 million paylines.

This obviously didn’t happen a lot and I only saw the Rainbow Wild appear once. Getting the free spins mode to activate proved even more of a challenge.

Slot Vegas MegaQuads is a pretty interesting slot when it comes to its features. The use of 4 different playing fields in the same game is obviously not something you see often. They all operate largely independently, meaning that the player is essentially spinning 4 games for the price of one.

However, I feel like the game has enough features that lets the reels interact with each other to make them seem more than that. The Rainbow Wilds and Free Spins mode both merge playing fields together in different ways. Fortunate players might even see them all together, creating one of the largest playing fields you can find in any slot.

If you’re looking for a standard game with some high-tech graphics you’ll probably walk away disappointed. If you’re fine with a slot that has some outdated symbols but gives a unique play experience, you might want to give this one a try.

Browse casinos with Slot Vegas Megaquads™ and other slots from Big Time Gaming. Create an account and try the game for free before making a deposit.

You can play Slot Vegas Megaquads™ in English, Finnish, Swedish 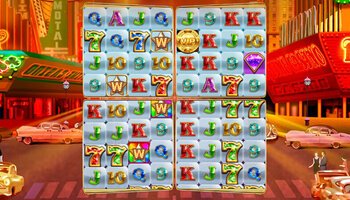