Snake Eyes is the game that immediately tells the player that it is a Zeus Play slot as it uses some of the staple graphics and design choices that we have come to expect! The game features Multipliers and Wilds.

This slot was released back in 2015 among a number of similar games by the same developer, some of them even using the same dice motif like Golden Dice 3 and Dice Tronic. Here too, dice play a big part, mostly as they fill the role of the different symbols. What is different is that this is a 3-reel, 3-row playing field which makes it a lot smaller. The game comes with 27 paylines which is a lot considered the small playing field but will come into play later with the features.

The game does little to set the stage or create any type of theme. We see something that might be a Florida beach in the background as it is shown during sunset. The symbols are all different dice with separate colours to keep them distinct from each other.

Another element that we’ve seen across multiple Zeus Play slots is the music and sound design. The song that plays is a terrible electric keyboard jingle that fades in and out with every spin making it sound extremely annoying. The reels themselves make a simple clicking sound and any wins with its Medium Volatility will trigger a different type of electric jingle.

The slot has a number of different symbols that are all based on dice. In general, the game just requires the same symbols to appear on one of the win lines but it is also possible to get a win with the use of Wild somewhere on the screen.

The dice all look the same except for their colour and the different amounts on them. Although this makes them easy to tell apart, it’s also quite boring visually and creatively.

Snake Eyes keeps things simple when it comes to the features as well although it changes things up slightly with how the Wilds work. In total, the different features are:

In a gameplay sense, these features don’t really have a big impact on the way the slot plays. The Wilds are rather rare to show up and they especially don’t show up a lot with two at the same time. This meant that the advantage of getting two wilds as part of a payline and receiving a higher win felt rather wasted.

Players have the opportunity to change their bet to a value between £0.10 and £30 per spin, but in reality, it didn’t feel like it made a big difference. The game might be one of the most stable ones I’ve played where the number of wins and losses were almost exactly in balance for a long time. The slot would sometimes trend slightly above or below my starting funds but if I kept going it would eventually even out again.

I think this is a nice element for players that aren’t looking to win or risk big, but simply people that enjoy a slot. Too bad this game is rather bland and simple, making it feel like a waste to spend your time on this.

The Multiplier feature is a nice idea as well but never occurred even once during my time playing. It also does not apply to all symbols, only the low-paying symbols with the smallest payout can benefit from it.

Technically players can walk away with up to 21,600 coins or about 216x your bet. This isn’t even the max. win though as that is 648x your bet. Still not that high compared to other games but better than the multiplier feature allows.

Snake Eyes is a slot that won’t keep many people’s attention for very long. The features are bare and bland, besides not showing up enough to feel like a part of the game. The volatility makes it also rather simple as it does not go up or down too much at any point.

If you’re looking for a classic fruit machine you won’t find it here as the game offers no fruits whatsoever but also has way too many paylines to fit the classic mold. People that want to play a simple standard slot will likely be disappointed by the outdated graphics and the truly awful music.

I would not recommend this slot to anyone. The symbols are nice, if simply, animated which brings some movement to the screen but other than that there isn’t much I can say about it.

You can play Snake Eyes in English 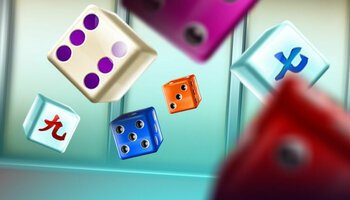